Christine And The Queens – Chris 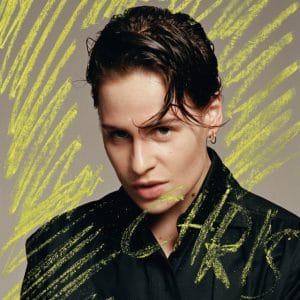 Christine And The Queens kind of snuck up on us a few years ago. One minute there was hypnotic dance routines and Gallic interpretations of Kanye West songs, the next minute, Héloïse Letissier was guesting on a Madonna tour and seeing her iconic video for Tilted recreated in an episode of cult US TV show Better Things. Suddenly, Letissier was a very big thing indeed.

Most importantly perhaps is the music, which is even more sumptuous this time around. Chris is 11 tracks (or 23, if you opt to also buy the French version) of slinky, soulful, addictive pop which could lay claim to being the sexiest album since Prince sadly checked out. Girlfriend, a collaboration with Californian funkster Dam-Funk, is typical of the record, an unapologetic carnal trip, from the beginning gasp of “Chrissss!” to lyrics like “Yes sir, I am wet, for I abandoned my fame in the lake”. By the time she and Dam-Funk are breathily intoning “touche, touche, touche”, you’ll find it impossible to sit still.

Doesn’t Matter is equally striking, built on an infectious bassline (which, at times, sounds like it’s about to explode through the speaker) and skittering hand claps, the song’s subject matter switches from sex to religion, as Chris muses on the existence of God and nihilistic thoughts. It may not be usual for one of the best pop songs of the year to have a chorus of “If I believe in God, and if God does exist, it doesn’t matter, does it?” but she pulls it off here.

Damn (What Must A Woman Do) turns the attention back to sex, another floor-filler which looks at the shame thrown at women for showing desire. It sees Chris talking about the “taste on a butch babe in LA” and the “spit on a young man, fresh asleep”, before bursting into a chorus of “damn, what must a woman do, para follarse” – ‘para follarse’ being a Spanish expression translated as “to fuck”.

When the tempo drops, things aren’t quite as magical – What’s-Her-Face has a heartbreaking story to it, being about the after-effects of school bullying (“nosebleeds dismissed with a cruel hum, it’s been years since that playground”), but the song itself is a bit too ponderous to truly catch fire like the more upbeat songs on Chris. 5 Dollars, meanwhile, is the polar opposite, one of those songs that you can tell is going to inescapable over the next few months, a bright, breezy anthem with Chris’ voice making the song sound like both the saddest and most euphoric thing you’ve heard for a long while.

It’s true to say that Chris seems to run out of steam a bit at the end, with only the beautifully reflective Make Some Sense really standing out during the album’s last few tracks. Nevertheless, this doesn’t stop Héloïse Letissier’s second record being one of the year’s most intelligent, enjoyable albums, and cements her position as one of our most intriguing, interesting pop stars.