Christine And The Queens – Chaleur Humaine 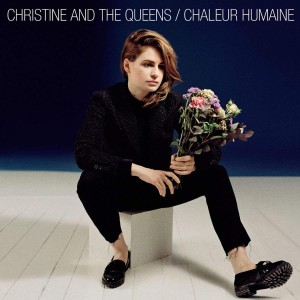 There’s been some interesting goings-on with reaction to pop music of late. Indie types have been embracing the Fleetwood Mac-like charms of Hinds and the big bold pop of Taylor Swift’s 1989 (notably prior to Ryan Adams‘ contentious cover version). This, no doubt, has some connection to the different ways music is consumed, and in turn how that has introduced a fluidity to genre.

Whatever the reasoning behind this change of heart might be, it’s refreshing to see the music press and, sometimes, haughty alt-fans embracing quality pop music. And Christine And The Queens’ Chaleur Humaine should slide effortlessly into that category. Unlike the out-and-out pop blast of Swift or the bass-face strut of Hinds, Héloïse Letissier’s synth-driven record is a more subtle, catch-you-unaware affair.

Letissier became Christine when she fled Paris for London after a heartbreak. She found solace in Soho’s Madame JoJo’s and the queens she found there. It was a time in which she explored her own sexuality – she has since identified as pansexual – and many of the songs on this record fall under a similar scrutiny. Chaleur Humaine, released in mainland Europe in 2014 and curiously only now finding a UK release, opens with iT’s glimmering piano and irresistible beat, and it has a lyrically playful time with gender identity. It’s Christine versus the Queens, battling over semantics. The Queens argue, “She draws her own crotch by herself/But she’ll lose because it’s a fake/It’s a fake”, but Christine is resolute: “No! I’ve got iT/I’m a man now/And there’s nothing you can do to make me change my mind.” Ultimately, Christine wins out and all the Queens can do is concede: “And there’s nothing we can do to make her change her mind/She’s a man now.” It’s a wonderfully celebratory tune and a grand opener.

There’s no doubt this is a collection of highly personal songs, but Letissier is playing with identity in a wider sense also. She has created a set of living, breathing characters that offer a veneer of protection – however thin that might be. And she also has a grand old time playing with genre. Many of the tracks are, more generally, best described as out and out pop tunes, like Tilted, but even these are always brewed with an interesting composition and married with subtle yet instant hooks. Letissier herself has self-described it as ‘freak pop’. Whatever label you prescribe, its basic beat, warped synths and French language rap segment makes for more unusual, but nonetheless irresistible tune-age.

Paris Perdu is the album’s most Europop moment. Aside from the yearning “How could you be so heartless” refrain of the chorus, the verses are delivered in her native tongue. But it’s not language that gives it it’s Eurovision sheen, it’s the open-hearted pop sensibility. Were it not a prerequisite that Eurovision entries be pretty universally awful, you could imagine such a track eliciting a stream of dramatic announcements as every country relinquishes political bias and awards ‘10 points for France!’ But alas, that dream is for a parallel universe where such competitions house quality and harmonious politics.

Letissier also breaks out a few silky R&B numbers, such as No Harm Done. It hasn’t one hard edge and is delivered like a pro. And Science Fiction recalls the pop perfection of Michael Jackson and is built for making shapes. It’s one of the many euphoric moments on the record, but there are many that take a darker turn. Jonathan, featuring Perfume Genius, is such a track of gorgeously sumptuous spare synth clicks and two voices that perfectly compliment each other; the result is hugely affecting. The surge of Narcissus Is Back is just as dark of tone, and it’s a fine example of her vocal dexterity which is never overreaching or forced.

Night 52 also deserves a special mention as one of the album highlights. It begins as a piano ballad – there had to be one – but then introduces muffled bass drum and tumbling rhythms, morphing it into something fuller, less maudlin and rhythmically arresting. It underlines the depth of character to be found in this fine record, and the artist behind it. Chaleur Humaine is as sharp and classy as the suits Letissier dons, and is full to the brim with feeling.