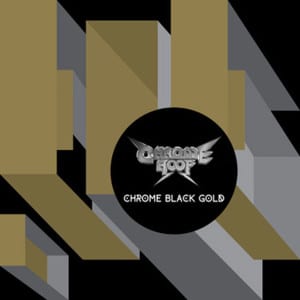 Apparently, Chrome Hoof have emerged from their “self-imposed hibernation cube” and “[proclaimed] its right to exist”. It’s been three years since Crush Depth, although it took the best part of 18 months to put Chrome Black Gold, a name sounding like a brand of poppers you buy from certain private shops, together.

Chrome Hoof’s founding member Leo Smee has put together a decent cast of musicians for this third album, including Shingai Shoniwa of Noisettes fame, vocalist and bassist Jeff Walker from death metal band Carcass and drummer Alex Thomas, who has worked with Air and Squarepusher and has death metal roots as well as part of Bolt Thrower.

This tells right from the off with impressive opener Enter The Drobe delivering an instant rush of electro-dance-punk with hints of death metal bass and drum balast. It veers towards Supertramp territory halfway through, before taking us back to where we were. The following track Knopheria is more conventional albeit just as satisfying, with Europop beats pulsating in the background and vocals intensifying the impressive Italo-inspired hooks. A potential dance floor filler.

When The Lightning Strikes is not a dance floor filler in the conventional sense; initially it’s ripe for letting out some pent up energy, with Walker and Thomas allowed to demonstrate their death metal backgrounds with throbbing, thick bass lines rumbling while suitable guitar riffs complement. Yet it eventually takes on a sort of death metal funk ebb, with Thomas’ intricate yet drawling bass complementing the high pitched female vocals.

Further surprises lurk; witness Ultimate Sealed Unit, which for its first minute has a simple beat building in intensity before, layer upon layer, we get metal-style guitar, leading to an analogue synth interlude and then into jarring changes in rhythm and sound, from thrashing guitar one second to pure funk bass the next, and onto full-blown tremolo picking and cymbal crashing that approaches Slayer levels.

It’s the clashes in style and the variety that keep Chrome Black Gold moving. Nothing typifies that more than Exo-Spektral, a ragbag of clashing genres and styles that strikes at the heart of Chrome Hoof’s ambition to be the purveyors of futuristic, sci-fiesque sounds. The dischordant, modulated synth clashes against roaring funk bass, disco-punk leanings reminiscent of The Rapture, plentiful strings and lyrics about giant planets. We then get acid house fading into heavy guitars and post-punk drumming with vocals howling above. One of those cases where it shouldn’t work but does. Very well, actually.

The six minute Varkada Blues takes us further into death metal territory, with Walker’s growling vocals taking control, yet this is before dropping into a state of electro calm, with chilled vocals, before reverting back again. The constant changes in genre keep you alert, your attention fixed. The last two minutes descend into a myriad of italo-punk-funk-electro rhythms, all merging and working together. Somehow.

Chrome Black Good is wonderfully diverse, wild, mischievous – and massive, sky-high fun. The poppers sounding album name seems rather appropriate having heard the album for, given the chance, it can induce its very own high. Chrome Hoof’s right to exist has here justly been proclaimed by Smee et al, and in skilful fashion.