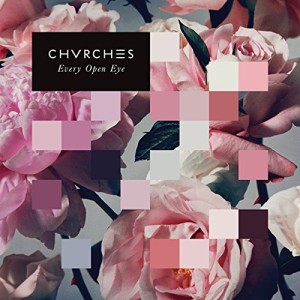 In the two years since the release of their debut album The Bones Of What You Believe, Chvrches have played somewhere in the region of 360 shows (and countless others prior to the album dropping). The songs from that album have been played to death on the radio, on adverts, in shops, and of course, by the band themselves on stage.

There must have come a point when the band thought about changing direction and bludgeoning those songs to death. As great as those hooks, bass wobbles and gilt edge pop songs are, and despite them propelling the band from blog favourite synth-poppers to genuine heavyweights, the constant need to play the same songs must have been infuriating.

The temptation to start from scratch and tear up the template for their second album must have been considerable, and yet Every Open Eye sounds like a continuation of their first album. There are subtle differences, most notably in the emotional tone of the lyrics, but sonically, there’s been no real significant change in the band’s modus operandi. They’re still indebted to the first wave of British synthpop bands, most notably Depeche Mode and Tears For Fears and there nods towards more modern exponents of the genre too (opening track Never Ending Circles is a dead ringer for M83’s Raconte – Moi Une Histoire) but now Chvrches have a heavier weight of expectation upon them. As much as the band’s influences are obvious within these 11 songs (14 if you go Deluxe), this is an album that consolidates the Chvrches sound and approach, which perhaps was a necessity before they made too many changes.

Where this album differs from the last is in its inspirational and positive tone. Where Bones… was peppered with references to relationships failing and having no control, things are different in Chvrches world now. Opening track Never Ending Circles could be read as a counter response to The Mother We Share, the opening track of Bones. Within the first verse, Lauren Mayberry coos “No more bones, and I will tell you no lies” which interestingly seems like a rejection of the first album and its third track, Lies. While electro/synth music is often described as being cold, here Mayberry makes steps to inject warmth into these songs. The verse finishes with her leaving, whereas the object of her desires leaves on The Mother We Share. It’s a subtle message, and one that can easily get lost in the opening salvo of Every Open Eye, but clearly Chvrches feel more empowered and certain this time around. The first four tracks seem designed to grab the attention, whilst also seizing control.

Leave A Trace finds Mayberry certain of her feelings and finding closure, and delivering a sweet vocal that drills deep into the pleasure centres. Keep You On My Side meanwhile sets off like a Hi-NRG stomper, with Mayberry finding strength in difficult circumstances. Make Them Gold is perhaps the most obvious example of her new found enthusiasm as she sweetly singing motivationals that focus on turning those black clouds into streaming sunshine. “We are made of our longest days…we will take the best parts of ourselves and make them gold,” she states in typically hooky fashion, and it’s essentially what Chvrches have done with this album, condensing everything that was great about their first record, got positive, and become a sleek but emotive pop machine. Clearest Blue finds the band revelling in their influences, knowingly channelling Depeche Mode and New Order but putting their stamp on it with assured authority.

The second half of the album, which begins after the breakwater of High Enough To Carry You Over (sung by Martin Doherty) sees a slight shift in mood and tempo, with songs like Down Side Of Me and Playing Dead becoming more introspective, whilst retaining the defiance that runs throughout the album. This concludes with the balladry of Afterglow, which drops the beats, favouring instead a mournful synth accompaniment for Mayberry’s delicate and damaged vocal.

Every Open Eye is a solid album with few surprises, and one that proves Chvrches to be no one album wonder. Even when they appear to be resting on the laurels a little, such as on the relatively simplistic Empty Threat, they still find a hook that makes it virtually impossible to dismiss it as entirely throwaway. They’ll need to be a little more adventurous next time around, but for now, they’re in fine fettle.