by Sam Shepherd
published: 25 May 2018 in Album Reviews
Tweet 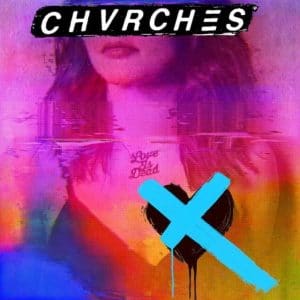 “Careful what you wish for,” intones Lauren Mayberry on Miracle. Quite what Chvrches were wishing for is open to conjecture, but after two self-produced albums, their decision to work with multi-Grammy winning producer Greg Kurstin on Love is Dead suggests that they might have an open eye on bringing their sound in from the peripheries of the indie world and depositing it directly into the mainstream.

Initially, in terms of sound, it seems as if nothing much has changed. Mayberry’s vocals are as you’d expect, there’s the synth-pop approach present and correct, and there’s the obligatory Martin Doherty vocal contribution on God’s Plan. Could it be Chvrches are turning into an indie-dance version of AC/DC; a band that constantly delivers the goods producing solid, dependable anthems?

Things have changed though, and what Love Is Dead does is to take the vibrancy of Chvrches’ first couple of albums and knock the edges off. Perhaps we’ve been spoiled by the likes of The Mother We Share or Clearest Blue, where Mayberry’s vocals roam and the band sound absolutely booming. But the longer spent with Love Is Dead, the more it becomes apparent that it sounds a little flat at times. Miracle asks “If you feel it could you let me know?” at one point, but it’s possible Chvrches might be waiting a while for a response.

Part of the problem is Mayberry’s vocals. We’re used to her exploring her range, and using it to flip through emotional states, but much of her delivery on this album stays safe, giving her little room to really let fly. Lyrically there’s little to grab hold of here either. The band, and Mayberry in particular, are outspoken on a range of topics, but very little of that fire seems to have translated to this record. In broadening their sound and their appeal, Chvrches will no doubt score a hit – these are songs that have been precision engineered to sound great on the radio and on big stages – but it feels as if they’ve lost their depth at times.

It’s not all bad though. The album kicks off in fairly spectacular style with Graffiti, a paean to growing old and putting away childish things. Living on and retaining youth through the scribbles on the bathroom stalls. “I’ve been waiting my whole life to grow old, and now we never will,” sings Mayberry, plucking at the heartstrings for a moment. If John Hughes were still alive and kicking, he’d have this song earmarked for the close of a coming of age movie – possibly some kind of Dorian Gray retelling with an eternally youthful Bender thanking his lucky stars for that pornographic, terribly aged scrawl in his locker.

Get Out also fizzes with that old Chvrches sound and possesses a huge hook thanks to an earworm chorus. Graves manages to take the theme of turning away from the stark imagery of the news (bodies washing up on the shore) and turns a tough subject into a pumping hi-energy disco track. It shouldn’t work, but somehow the sheer bombast of the chorus pulls it through. Perhaps for the first time in Churches history, it’s the Doherty-led song that impresses most. Channeling the dark disco thrum of New Order and coupling it with his basic but impassioned vocal creates an island of darkness and chilled introspection in an album crammed with pop sheen. The final track, Wonderland, finds the band in softer territory, and it’s here that they really shine with an expansive chorus that can’t help to illicit and emotive response – if Miracle demands a response to that question, then the answer should come just after Wonderland kicks in.

Elsewhere, Love Is Dead feels like something of a missed opportunity. My Enemy, which features The National’s Matt Berninger, but rather than use his distinctive tones in conjunction with Mayberry’s, they’re largely kept apart. What should be an exciting combination feels distinctly lacklustre and curiously lacking in real emotion. Rarely has Berninger sounded this smooth. Thankfully.   Repetition, when deployed correctly, can be incredibly effective (just ask The Fall) but sadly the likes of Forever and Never Say Die don’t quite get it right. Leaning heavily on a single hook starts to become grating, particularly in the latter’s case  (“never, never, never, ever, never, ever, ever, say die”).   Love Is Dead is not a terrible album and it certainly has its moments, but it’s not as engaging or interesting as its predecessors.