Circe – Music Composed For The Show Of Shows 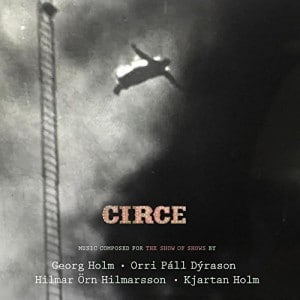 Circe, a collaborative work between two members of Sigur Rós (bassist Georg Holm and drummer Orri Páll Dýrason) and celebrated Icelandic composer Hilmar Örn Hilmarsson, together with Holm’s touring guitarist brother Kjartan Holm, was commissioned for the documentary The Show Of Shows which will be a part of the BBC’s Storyville series in 2016.

As might be expected from a title like The Show Of Shows, the documentary looks back at footage of carnivals, vaudeville acts and circuses from the last 100 years. Soundtracks are usually released at the same time as the film or show that they accompany but, in the case of Circe, only a lucky few have seen the screenings at the Barbican and Latitude Festival earlier in the year. At the moment, it is only really possible to judge Circe in isolation as a standalone piece of work, although the recent trailer suggests that the marriage of image and sound will work just fine.

Those expecting archetypal circus music will be sorely disappointed. Circe is a purely instrumental work, and a rather quaint one at that. There are no blaring organs, nothing that could adequately accompany a monkey parade, or a human cannonball and certainly no hollered invocations to “Step Right Up”.

Of course, most would know better than to expect anything too over the top or frantic, this is music written by two of Sigur Rós after all, a band who over the years seem to have redefined the terms elegance and beautiful. Each of these pieces appears is shot through with a degree of reverence and grandeur. Even the quietest moments seem to have a quality to them that makes them feel significant, and that may be why Dýrason and Holm fit the bill for the documentary. They have a way of making the small seem significant, and when they go for the jugular (or juggler as may well be the case in the film) they’re simply phenomenal.

Perhaps the loudest moment here is The Crown Of Creation which rumbles with sinister intent. The drums rumble and the guitars feedback, and for just a moment, there’s something threatening looming. It’s a mood that needed to be present here, because despite circuses and carnivals claiming that you’ll have all the fun of the fair, for many there’s a sense of danger and a threatening undercurrent that lurks under the big top, or behind the mask of a clown.

For the most part though, this is an album that meanders along, its notes most likely written on the stave in sepia tones. It is the sound of the midway in the early hours of the morning. There are no garish lights and no barkers, just a feeling of calm at the heart of the most exciting show in town. Sigur Rós fans will not be disappointed; it is every bit as beautiful as any record the band has made to date. The likes of Filaphilia (A tribute to Siggi Armann) illicit a genuine emotional response, even in the absence of the images the music was written to accompany.

Another absence on the album is that of the vocals of Jónsi, who perhaps more than anyone is the key signifier of the Sigur Rós sound. Yet these atmospheric and poignant pieces live and breathe perfectly well without him, and could easily fit into the band’s canon. It will be interesting to see this already vibrant work come to life further, when Storyville finally hits the screen in the new year, but for now, it works perfectly well as a standalone piece.