by Steven Johnson
published: 19 May 2014 in Album Reviews
Tweet 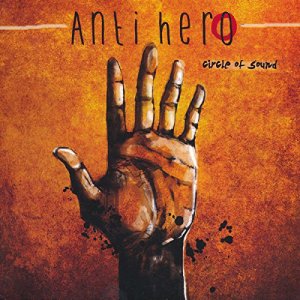 The sarod may still be below the sitar and tabla in terms of instruments most commonly associated with Indian classical music but London-based musician Soumik Datta is slowly changing perceptions and helping to increase its prominence through both solo performances and collaborative projects. An instrument comprising anything between 17 and 25 strings (all which fall into sub-categories performing specific roles) it exudes a warm, rousing and (if required) complex sound. Alongside Austrian percussionist Bernhard Schimpelsberger, Datta makes up Circle Of Sound, a two-man musical platform where exploration, invention and improvisation are allowed to flourish.

On second album Anti Hero they are joined by a cast of guest musicians – Nitin Sawhney and Anoushka Shankar may be the biggest names but equally significant contributions come from English vocalist Fiona Bevan and Ethiopian singer Rahel, both of who provide vocals on two tracks each. These four tracks are spaced out over the course of the album, interspersed with sumptuous instrumentals centred around Datta’s sarod playing. The strong presence of the sarod links everything together, ensuring the album retains an unbroken flow.

Sunrise ushers in the album, establishing a laid-back, atmospheric feel imbued with a subtle hints of exoticism, Bevan draping her sensuous vocals over the melodic shifts of Datta’s sarod. It’s extended furthermore on Skeleton Leaves which is opened by Sawhney’s spacious flamenco guitar. The rest of the track possesses the same polished, harmoniously transgressing sound that he’s built his career around. Rahel’s appearance on the title track brings a cleansed smoothness as well as some quietly expansive electric guitar lines – the first time musical styles are overtly fused. She contributes more soulfully euphonious vocals later on Tokyo Slo Mo which comes complete with a dazzling mid-song sarod intervention courtesy of Datta.

Zero presents some of the most pleasing moments of complexity on the album, fast-paced percussion from Schimpelsberger intertwining with Datta’s increasingly frenetic and energetic sarod playing. The blazing guitar outro on Stray Dogs Vicious Circles is another high point and shows their masterful incorporation of styles and sounds.

The album also benefits from some well-structured ordering – The Return sees the pace drop again, whilst also achieving a certain level of inner-peace that recalls Zero 7 at their most featherlight and exquisite. The appearance of Anoushka Shankar on XY provides a timely reminder of last year’s superlative Traces Of You album, her glittering sitar melodies cascading to striking effect through the track. Datta is able to summon similar levels of drama on Hero, his pacy sarod escalations here aided by the sharpness of the orchestral backing arrangements. It makes for an explosive finale and embodies the boldness and sense of accomplishment that runs central to the album.

Circle Of Sound MP3s or CDs

Circle Of Sound on Spotify