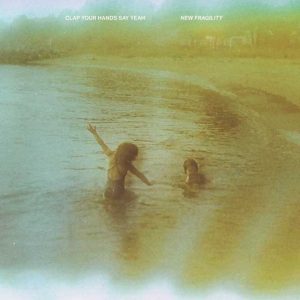 Stains leave their uneasy smear on the first two tracks of New Fragility, the new record by Clap Your Hands Say Yeah. Peppy opening number Hesitating Nation is rife with narrative imperfections, be it the residual marks of spilt wine, the taint of political corruption or the detrimental impact humans are having on the world through our excessive and apathetic pollution. The hangdog observations don’t stop there as the desolation seeps into second song Thousand Oaks, written in response to front man Alec Ounsworth witnessing an interview with the survivor of a mass shooting and being affected by the blood smeared shirt she wore.

Lyrically this is not the first time the Pennsylvania born musician has addressed our indifference to mindless atrocities. Way back on their much talked about and highly loved debut, there was a closing acoustic stomper about the escalating death toll of young Americans slaughtered during the Iraq War. Lumbered with a festering conscience, the new fragility of the album’s title (pinched from a section in author David Foster Wallace’s Brief Interviews With Hideous Men) and the complicated melancholy of the record paints the once puckish Ounsworth as now haunted by the significant traumas of the age, the unbridled elation he was once known for reduced to a dangling carrot he no longer has the energy to chase.

That softening of his once trailblazing eccentric songwriting is a result of much soul searching. Not only does Thousand Oaks reflect on gun culture, it also finds Ounsworth, an island of a man, feeling around inside for assurances that he has retained compassion. Intoxicated and mournful Dee, Forgiven casts a raised glass to a now exhausted partner over considered bluesy piano tinkling.

It’s not all doom and gloom though, as the motorik exertions and echo chamber choral lifts of title track New Fragility almost pull Ounsworth away from the comfort of his insular condemnations. Warm orchestral strings announce Innocent Weight, as restrained verses curse uncertainty and confusion slowly gives way to sweeping responsive guitar solos. There are unexpected blasts of late period studio bound Lennon & McCartney sewn into the teary multi-tracked psychedelic Mirror Song, another ballad about surveying emotional wreckage. CYHSY, 2005 takes a meta approach to the unregulated power wielded by critics, referencing the unfair critical dilution that’s befallen the band since the first release. Where They Perform Miracles offers damning scrutiny of familial deterioration, the teary harmonica adding an appropriate dash of Americana.

Throwing a light on the minutiae of his fraying psyche doesn’t always make for the easiest of listens. No longer buoyed by adolescent concerns, Alec Ounsworth may not be in the happiest of states. But if you heed closely you’ll hear the sound of one man’s combing for moral redemption amidst societal and individual collapse. And that deserves applause.