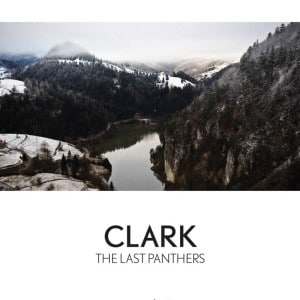 Clark is Chris Clark, an English music producer dabbling in electronica. His sound comes from the obsessive distortion, degradation and decay of sounds, re-recording field recordings until an authenticity of history and texture bleeds from them.

The Last Panthers is Clark’s original score for the Sky Atlantic crime series of the same name, set to accompany the unfolding of the narrative of the characters as it spans different eras. Inspired by the notorious Balkan jewel thieves The Pink Panthers, it’s a story that traverses Europe. A cold authoritarian air whips through the album, bristling with drama in a stately grandiose manner.

The soundtrack is made up of 19 tracks of glacial hypnotism. Shards of music edge slowly meet to create undulating ripples of sound. They sound as though they might be beamed in from another time through degradation of source materials, or another planet with the sonic message altered by atmosphere through its cosmic voyage.

Resolutely downbeat and bleak, with ominous titles (Strangled To Death In A Public Toilet, Chloroform Sauna, Brother Killer) The Last Panthers’ barren beauty conveys drama without requiring seeing the drama it accompanies. Like the pastoral side of Aphex Twin (a label mate) the music is melancholy and dusty, like motes of dust caught in the sunlight.

Tracks are suitably brief, but when they do get the opportunity to stretch out, as on opener Back To Belgrade (an echoing piano motif and skittering percussion) they create a sense of elegant foreboding. The plod of Hiero-Bosch for Khalil rises slowly from its sound bed to resemble an abridged national anthem.

Tentative piano chords underscore the wavering violin melody on Diamonds Aren’t Forever, while on Naomi Pleen the piano’s central melody gets submerged in banks of echoing mist and reverb. Panthers Bass Plock, Strangled To Death In A Public Toilet (replete with celestial choir) and Open Foe sound like Brian Eno dabblings in ambience (more chilling than chillout). Actual Jewels sounds like a wind-up music box slowly breaking down, while Dead Eyes For Zvlatko/Heaven Theme begins with sustained chords and ends in a drone of peaks. Diamonds Aren’t Forever II unleashes the restraint that has been held back for so long before breaking down into a post-dramatic comedown.

Covering the biblical grandeur of the story cloaks this soundtrack in moods of brooding darkness through to tender sentimentality. Take the ominous heartbeating menace of Brother Killer, set amidst a cacophony of thunderous chords and sonic mist to create a presence of a predatory evil lurking in the shadows. But Clark proves that he doesn’t need all the sonic battery to set a mood as on the warm, homespun upright piano-based Omni Vignette, where it sounds like eavesdropping on a private practice piece. The closing triptych suite of Hide On Treads moves from genteel lysergic xylophone to stately piano before climaxing in the deceptively euphoric closing section.

Clark’s machine world, emulating the vistas of human emotion and evocation of place, are nothing new; Kraftwerk and their followers have been proving there is a heart that beats within electronically generated sound for decades. Yet Clark takes creating this soundtrack to monumental forms, letting the components get weathered and scarred through his manipulation to create a landscape of history, emotion and musical depth.