Clark – Playground In A Lake 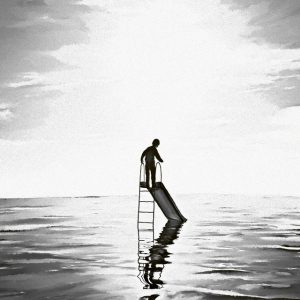 The name of Clark might still be largely synonymous with forward-thinking, inventive electronic music but a quick glance back over his recent projects reveals how he’s been pursuing alternative musical avenues and exploring different sounds for some time now. Recent years have seen him venture into the world of soundtracks, whether scoring Adam Egypt Mortimer’s 2019 psychological horror thriller Daniel Isn’t Real or composing music for TV series like Kiri and The Last Panthers and these endeavours find their way strongly into ninth studio album Playground In A Lake.

Clark has revealed that the album was influenced as much by two works of written philosophy as by musical considerations, specifically Infinite Resignation by Eugene Thacker and Denial Of Death by Ernest Becker. Given these are heavyweight, aphoristic works that take in existentialism, human psychology and more, it’s not a surprise that Playground In A Lake feels like Clark’s most cerebral offering yet.

There’s also an additional narrative dimension to the album, something he alludes to when he describing the album as being “broadly a story about real climate change, but told in mythological terms” (the album cover offers a stark visual translation of the ideas he channels through the music). Factor in how he learned to read and write sheet music especially for the album and also how it’s released on celebrated classical label Deutsche Grammophon and you can start to get an idea of its boundary-ignoring scale and depth. Yet, importantly, it’s in no way a daunting listen; it may have labyrinthine layers but these are are all more than navigable.

Even when he was operating deep within purely electronic circles he always managed to cram a lot into his albums, even if they were stylistically more compact, so later musical reroutings like this shouldn’t come as such a surprise. 2006’s Body Riddle showcased a distilled, classic Warp form of electronica while Totems Flare featured more in the way of raw, ramped up sounds. Iradelphic saw him stretch his style in increasingly interesting directions and 2014’s self-titled release featured arguably some of his most maximalist and impactful moments without reverting to stereotype.

The predominance of strings and piano in the opening stages of Playground In A Lake indicate another extension into broader musical ground is forthcoming. The focus here seems to be on texture and colour, with the lack of rhythm or percussion being notable and possibly a little wrongfooting, in the best possible way. It’s not until More Islands when the axis is tilted in a more electronic direction, and the first sign of melodious electronic Clark emerges.

The album features several guest appearances, most notably from Grizzly Bear’s Chris Taylor on clarinet and Oliver Coates on cello, as well as vocal contributions from 12 year old choir boy Nathaniel Timoney on the likes of Forever Chemicals, Emissary and Small. The latter in particular has echoes of the much missed Broadcast. The closing stages move through darker territory, Entropy Polychord featuring restless strings and the dystopian Earth Systems projecting shapes that loom ominously. The foreboding dynamics of Shut You Down might only last five minutes but feel like they could be easily expanded to take up a half of an album on their own. Ten minute closer Life Outro meanwhile offers a restrained amalgamation of brass and electronics that recalls the gravitas of prime Jóhann Jóhannsson.

It’s hard not to see Playground In A Lake as the most ambitious Clark release to date, an adventurous collision of different musical worlds that also carries an important underlying environmental message. It offers a bold pointer towards the future, both in terms of Clark’s own ongoing musical journey and the broader fate of the planet.