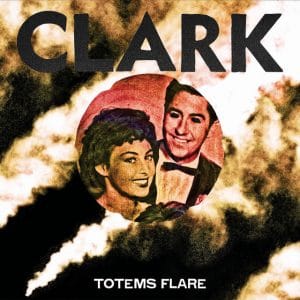 Experiencing the music of Chris Clark for the first time is rather like being taken on a tour of a mysterious cave. “Welcome to the extraordinary sound world of Chris Clark,” you hear the guide say. “Here you will find music of many frequencies, timbres and rhythms. No straggling at the back though, otherwise you’ll be abducted by one of the mysterious cave dwellers, and we’ll have to come and rescue you”.

And that’s exactly what does happen. Delirious from the sonic overload, you stop to gaze on the cave walls – and suddenly find yourself all alone, removed from your party and taken to a very strange place indeed.

In previous Clark albums, such as Clarence Park or Empty The Bones Of You, this would have been a place of unremitting darkness, but Totems Flare is all the more remarkable for showing stunning glimpses of light, occasionally gazing fully on the sun.

Take Future Daniel, for instance. This is a place few could have expected Clark to consider exploring, starting as it does with a stately chord progression before steadily gaining momentum and culminating in the sort of glorious rush you associate with early 1990s rave music. Growls Garden brings together both light and dark with its boomy, stuttering break beat and crooked, Aphex Twin-like arpeggios.

Not all is sweetness and brilliant light, mind, and there is something extremely disquieting about the marriage of the frenzied beat and ominous vocal brought together by Rainbow Voodoo. Luxman Furs is a curious animal, too, with its strange march-like tread exerting a powerful grip on the melody that follows it around like a well trained dog.

At times Clark makes noises that are the sonic equivalent of scraping your nails down a blackboard, while other times finds combinations and timbres of rare beauty, sounds that flutter around like seldom seen butterflies. When these are played on a home cinema system the effect is stunning, almost overwhelming – yet at the same time Clark somehow keeps some intimacy in his music, so that it reveals its true secrets on headphones.

One thing that cannot be disputed is that Clark is now so prolific his record company can barely keep up with his output, and yet that output seems to broaden its horizons and ambitions with every release. As a result, Totems Flare is his best album to date, sparkling with man made brilliance but sounding natural and organic at the same time.