by Laurence Day
published: 28 May 2014 in Album Reviews
Tweet 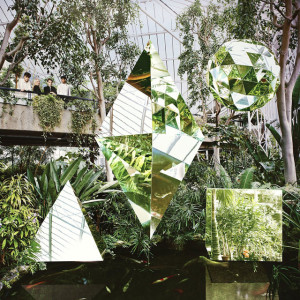 Alongside the au courant balladeer Sam Smith, Clean Bandit are forcing the spotlight to shift north of LDN, towards the blue fens of Cambridgeshire. Between them, they’re currently dominating the UK chart, and the latter is set to hog even more of the glow in the wake of their eagerly-anticipated debut LP, entitled New Eyes. We’ve been waiting with bated breath since 2012, and though we’ve had a slew of Top 40-bothering singles, this will be the first time that the four-piece have produced a longform product.

Defining their genre is famously difficult. Incorporating classical motifs from Mozart and Shostakovich, the foursome careen wildly away from the norm of dance. There are flecks of modern pop and dance genres, like Balearic (which also frequently employs strings), D’N’B, house, synthpop and UK funky, but it seems facile to label them as any one of those. The words ‘baroque’ and ‘chamber’ get bandied around a heap also; again, a glib response to the inclusion of strings. Clean Bandit are fascinating in that they genuinely do entice us with a brand-spankin’ flavour of pop music.

New Eyes is a fantastically fun record. It’s laser-guided music, with sights trained on parties across the globe: the beats are powerful, the earworms infectious. The classical elements, and furthermore, the instrumentation, inject a dose of the natural into the brew, with violins and pianos giving tracks like Rather Be an organic bent. Even the Animaniguchi-esque closer, Outro Movement III, seems handcrafted and human. It’s something often missing from dance music, which can lead to a track sounding plastic, but Clean Bandit’s widened repertoire ensures that they sound like a band. Moreover, they sound like they’re playing from the heart, as opposed to pressing the ‘play’ button on a laptop.

There are missteps, however. Mozart’s House has some cheese-addled, jarring spoken words samples: “You think electronic music is repetitive?/ Well it is repetitive…” which are just extraneous, cringeworthy tendrils. Telephone Banking’s lyrics leave something to be desired too: “Check my clothes – I wear chinos/oh I’m such a lovely man, if you could see me now/spent all your cash on cappuccinos…” Chinos? Impressive. Come to think of it, perhaps Love Ssega is the issue, as he guests on the two most glaring falterings.

The highlight of New Eyes, hands down, is the title track. Formidable silver-tongued wordsmith Lizzo, whose own debut – Lizzobangers – is just ruddy phenomenal, lends a dab hand to the fray. Above jittering, juddering semi-dubstep beats and the icy shards of synth glory, Lizzo’s Gatling gun flow and sabre-sharp wit grabs you by your lapels. It’s an aggression that the album lacks – it doesn’t necessarily need that confrontational aspect, but the surprise of the contrast that Lizzo provides is galvanising.

There’s been a minor clamouring of voices declaring that Clean Bandit will bring (once more) classical to the masses. This seems unlikely – though they’re using these samples and paying these homages, it’s like saying Jason Derulo made Imogen Heap a household name off Whatcha Say, or that Kanye West brought soul back with his sampling. While what Clean Bandit are doing is incredibly interesting, it’s probably premature to say that they’re harbingers of musical enlightenment. They may, however, be the heralds of super-duper/boogietacular parties across the summer.