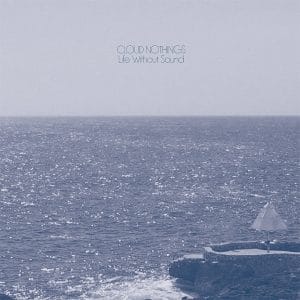 Amid a landscape of complex productions, guest spots and collaborations, it’s good to know that bands like Cloud Nothings are out there, doing their thing.

And four albums into their existence as a band we now have a pretty good handle on what their thing is: Nirvana meets Green Day grunge-pop, unpretentious guitar music that rides on intense currents from time to time, but which ultimately serves as the perfect vehicle for carrying frontman Dylan Baldi’s invariably fine hooks. Their self-titled debut album might have set the tone, but it was their 2012 follow-up Attack On Memory that truly started to define it, and 2014’s Here And Nowhere Else that really perfected it.

Life Without Sound begins with a piano melody and for a few seconds the possibility that Baldi is trying a new approach hangs in the air. But the guitars start to build behind that melody almost immediately, and before long the piano has been near enough drowned out by a textbook example of a Cloud Nothings song: the warm guitar tone is the same as it’s been for a couple of albums now, the riffs have an unapologetically poppy edge and the lyrics are characterised by understated introspection.

One of Baldi’s strengths as a songwriter is his ability to shift from upbeat, bouncy songs – Internal World is a good example here – to darker, more dissonant tracks like Strange Year, while maintaining a recognisable sound and a mood that remains consistent across an album. This was a fine quality of Here And Nowhere Else, and it’s perhaps the best thing about this record.

This might suggest that Here And Nowhere Else is a zenith against which Life Without Sound must be judged. That is sort of true – and, to be frank, it doesn’t quite reach the same heights. The production is lighter and more spacious here, and the effect is that the songs grab onto you a little less tightly. The sense of anthemic catharsis is present, but not quite to the same degree.

But the two records are essentially similar in their mood and effect, and the snag with this album is that it follows the formula set by its predecessor uncomfortably closely. The introduction to Things Are Right With You has a strikingly similar rhythm to I’m Not Part of Me; the way that Baldi’s vocals descend towards a scream in Darkened Rings recalls the repeated ‘Swallow’ of Giving Into Seeing, and the brooding Realize My Fate, which climaxes in a blur of feedback and drum-rolls sounds a bit like a slowed down Pattern Walks. It’s undoubtedly a successful formula, but when one album reminds you so often of another that came before that it feels like it’s been written to a template then you can’t help but yearn for some deviation.

Despite the fact that Cloud Nothings are now a pretty established band, Dylan Baldi is still only twenty-five, so the upshot is that he no doubt has years of music ahead of him in which to start pushing outside of his natural habitat. There are enticing hints of this at the tail end of Life Without Sound. Penultimate track Strange Year can’t resist opening out into a big chorus eventually, but there a pleasingly sludgy build-up, and some slasher-movie piano comes in towards its end.

Realize My Fate must have been recognised as perfect closing track material almost as soon as it was recorded: driven by pounding drums, it rises to peaks of crashing cymbals and unwinding guitars, and is beautifully controlled throughout. The space between verses and choruses is just a little longer than it needs to be, and the resulting tension is a nice touch. The eventual release into feedback is even better.