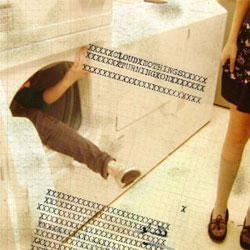 Cloud Nothings are another band to put in the increasingly oversized ‘box for lo-fi indie rock bands’ that has become the sound of hipster sites and publications in the last year or two. Perhaps what’s a bit more intriguing about this outfit is that it’s just one dude: Dylan Baldi (what a name!), an 18-year-old from Cleveland, Ohio making all manners of fuzzy noise in his bedroom.

This collection of songs, called Turning On, is meant to be considered as a prologue to a proper debut – this is currently being recorded in Baltimore with an early 2011 release date pencilled in – since it gathers together songs from the Turning On EP and various other hard-to-find singles. It’s also been reported that future Cloud Nothings material may not be quite as lo-fi, which, as you listen to this record more and more, seems like quite a good idea.

Turning On makes its intentions clear from the off. Can’t Stay Awake tumbles out of the blocks and the drumming towards the end is scattered and frantic. Despite a sense that things feel out of control, everything meshes together into two minutes of ferocious garage rock. Incidentally, the album closer Another Man almost acts as a bookend as it ends Turning On in the manner it started: tumbling and stumbling under its own weight in sound.

In between those two songs are plenty of highlights to be found. Whaddya Wanna Know is as jangly as its possible to get for Cloud Nothings and is already a sure-fire live favourite. My Little Raygun is one of the more raucous tracks; its energy is masked by an onslaught of effects and it packs a rather good-spirited punch. Turning On is less fiery but it’s still gloriously ramshackle and charming.

The only problem with the record is with not only the best song out of the 13 but also the most frustrating; Water Turns Back is a slow jam that is reminiscent of hazy summer days, wonderfully lazy and a real delight. If the vocals on the song had a bit more clarity to them, allowing another wave of melody to seep through the speakers, as opposed to being hidden by distortion and reverb and whatever else Baldi is using, then this would have been something special.

Whilst there are high points, Cloud Nothings need to carve out more of an identity or else risk being an also-ran – lost in the haze of the lo-fi genre. But Dylan Baldi can obviously write, and there’s plenty here to keep the listener interested enough to anticipate his ‘proper’ debut. Ultimately it’s an encouraging start.