by Aaron Payne
published: 20 May 2013 in Album Reviews
Tweet 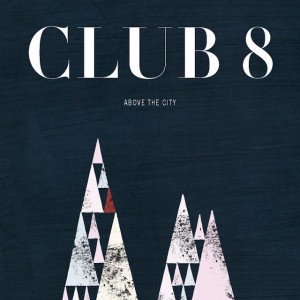 Club 8’s Above The City is a bit of a mixed bag, but on the whole it’s a mixed bag full of goodies. Moving between styles and demonstrating an unusual range, the Swedish duo add another successful chapter to a career that’s seen them constantly evolving.

Above The City is tightly structured. Interludes break the album into three sections, the first of which contains various pieces of apocalyptic, alienated disco. The second demands to be played on the way to the beach, while the third switches between quiet introspection and uncharacteristically overblown pop. It does feel a little arbitrary to have laid out the album like this, but it was on balance probably a wise decision.

Above The City is essentially three EPs, joined by instrumental tracks. To have attempted to run them together would have been to impose a false cohesion on a disjointed set. Lack of cohesion is either a fatal flaw or rather charming. In this case, the combination of Karolina Kmostedt’s voice and the constant presence of buckets of echo are just enough to hold the whole thing together.

The second section of the album is the best, or at least the easiest to love; which, with pop, is half of the point. Hot Sun makes unusual use of a sticky, dubby bassline to power an echoing, slow hymn to fun in the sun by the sea. Blinding white beaches and clear blue skies are the only reason for music like this to exist. There’s a fair amount of sex on show (as was also true in a far more creepy fashion in the first section of the album), with showers taken in rooms “rented by the hour”. It’s all very hot, as is only to be expected.

A Small Piece Of Heaven continues the beach feel, and sounds like a lost chart topper from the 1980s given a modern treatment. For a band that started out in the mid-1990s, Club 8 sound more hipster here than half the kids in East London. I’m Not Gonna Grow Old continues in this vein, and adds a little disco guitar for good measure. There aren’t many records that go this overtly pop while remaining this cool, and they’re all Swedish. An entire album built out of this sound might well have started to grate, however, and it’s understandable that Club 8 decided to preface these more sugary moments with strange songs about sex and death.

The final third of Above The City veers back towards the cold Scandinavian nights of the album’s opening. The songs are a little more forceful though: Into Air bears a strong instrumental resemblance to Robyn’s Dancing On My Own, although Komstedt’s vocals are set on ‘ethereal’ again. It’s quite hard to adjust, not to miss the fun of the middle section. But it’s never been bad to be left wanting more, and once the adjustment is made, the closing section is fine. It probably contains the weakest material on the album, but with the exception of Instrumental – entirely superfluous and therefore more than irritating – none of it represents a failure, except perhaps a small one of judgement: Above The Air is a couple of tracks too long.

Travel would have made an effective closer. A House of Horror organ gently punctuates an otherwise sparse, eerily colourless tale of self-doubt and paranoia. Most of the musical material contained within Travel is sung by Komstedt’s and layered thickly. It’s all a bit strange, and as such links perfectly to the opening of the album. The two tracks that follow – Less Than Love and Straight As An Arrow – feel somewhat tacked on. They’re also overblown – the perfectly pitched restraint of the rest of the album feels somewhat undone by Bangles-esque chants and We Will Rock You drums.

Above The City is a decent album, and a classy addition to a by now enviable back catalogue. It’s not consistent enough to be incredible, but there’s nothing wrong with good.