by Sam Shepherd
published: 3 May 2010 in Album Reviews
Tweet 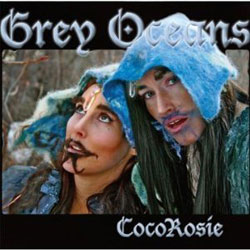 MP3s are rubbish, aren’t they? No physical product, no artwork, no lyrics and then there’s the compression issue too. However, CocoRosie may just have provided a singular positive.

Take a look at that album cover. What on earth is going on there? They look like they’re preparing for some kind of medieval fuzzy-felt banquet.� It is quite possibly the worst artwork to grace a record since Black Sabbath‘s Born Again, or Rod Stewart‘s An Old Raincoat Won’t Ever Let You Down. But it also serves as a forewarning of the weird world of CocoRosie, a world that has divided opinion since the inception of the band. Yet with Grey Oceans, cover aside, there’s a good chance that more people are likely to find themselves enjoying a cruise on the waves with the Casady sisters.

A brief look at the sisters’ past reveals further just how peculiar their world is. Born in the States, they spent their formative years moving across America with their mother in an almost nomadic existence. Their father, obsessed with Native American culture, would take them on vision quests on Indian Reservations. The sisters parted company at an early age only to be reconciled in Paris several years later, whereupon they created a band.

Grey Oceans finds CocoRosie just as weird but slightly less indulgent than they were on The Adventures Of Ghosthorse And Stillborn; just. The strange hissing of what sounds like steam under pressure introduces the album, and instantly the industrial feel of Eraserhead is called to mind. However, such harsh imagery is soon balanced out with the introduction of a soft piano and a lightly plucked harp. The sisters themselves float about in the mix with an almost ghostly presence, never quite pushing themselves to the forefront. Vocally, they’ve been constantly compared to the likes of Bj�rk and Joanna Newsom over the years, but Grey Oceans establishes them as important voices in their own right. The sheer dexterity and variety of the performances across the album is simply astonishing.

Smokey’s Taboo continues in the same vein, wistful coos and tablas providing a dusty, desolate soundscape. It’s here that the sisters really let their vocals shine, switching between a Bj�rkian schoolgirl croak and a soaring operatic vocal. It’s all very serious for a group that started out making tunes on kids’ instruments.

Hopscotch returns to those playful roots however, as a piano lick that would have rung a bell with Shirley Temple collides with skittering electro beats, a melody grabbed from Pink Floyd‘s Another Brick in The Wall and a seriously heavy set of bass pulses. RIP Bumface retains their sense of play in its title but is an assured grab bag of sounds, mixing xylophone, electronic glitches, tinkered with drums and those dainty voices. The result is like spinning the dial every 30 seconds on an old fashioned radio and magically creating a reasonable tune.

The whole album is an eclectic mix of folk, electronica, musical hall, eastern spirituals and stream of consciousness songwriting. Weird it may be, but when CocoRosie get it right, as with the cutesy pop and dark piano melancholy mix of Lemonade, or the beautiful ethereal balladry of the title track for example, they are unstoppable.