CocoRosie – Put The Shine On 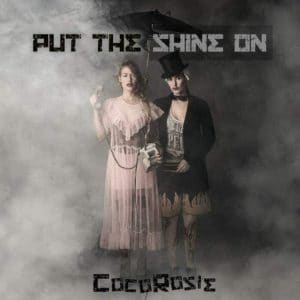 It’s hard to describe CocoRosie. Part decrepit, Victorian vampire swaddled in lace crawling across a graveyard at midnight, park folk-horror, part rap, part listless Americana, they make music for those of us who move eternally one step outside of reality, head in the clouds, hearts artistic in glitter. If you try and google it, you’ll find they’re undefinable (unless ‘freak-folk’ is an actual thing?) – but honestly, that’s just the way we like them.

Put The Shine On is the band’s first release for five years, their seventh overall. The lovechild of performance artist sisters Bianca “Coco” and Sierra “Rosie” Casady, the bulk of their work translates as an intimate psychological dialogue between the two, harnessing cross disciplinary skills and various multiple personalities. The result is something incredibly unique, and oh so very special.

Esoteric and operatic vocals on High Road welcome us to Put The Shine On, then in kicks a dubstep beat, thumping our organs. We hear a music box and a lonely piano, married with CocoRosie’s trademark vocals, and we’re transported back into their fairy-tale universe once again. But these fairy tales are nearer those of the Grimms’, of course: “Never cry wolf/don’t tell lies/don’t let the boys between your thighs”. Here we will find witches and monsters, but what is mythology other than allegory? Nothing more.

Mercy is a bubble-gum anachronistic rap backed by saxophones and a music-box piano, blending synthesisers in the mix – contrasting with lyrics full of malice and murder “You’ll be begging for mercy”. Restless uncovers operatic, epic vocals, a tale about knowing yourself. Clicks and pops like little fireflies haunt the punch of Smash My Head, a love song to personal violence, with badass guitars and flickering footstep synths that pull you into the air being the song’s inevitable conclusion.

Hell’s Gate opens with an incantation, the most danceable of the tracks – begging us “toss a penny to the sky/it’s your time to live or die”, we’re driven through the forest of familial chaos. Did Me Wrong subverts cute vocals again with hollow synth wobbles and low buzzes, musically channeling the sheer physical rejection of the body that goes hand in hand with child abuse: “He never meant to hurt anyone but boy he did me wrong”. We close out with Aloha Friday, driven forward with a sound that imitates the end of a film reel, and lulls us carefully to sleep.

All in all, Put The Shine On is a stunning update of the classic CocoRosie sound. Where before we had Imogen Heap, The Dresden Dolls and Blonde Redhead – all sadly fallen by the wayside – the sisters have managed a victorious return. What’s more, in our world where, at least in some part, oddity is becoming mainstream, the sisters manage to update this signature sound in a way that’s true to form, selling us odd feminist rap-folk that’ll be lodged in your liminal space for weeks to come.