Cody ChesnuTT – Landing On A Hundred 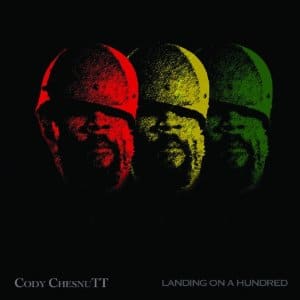 A lot can happen in a decade; fortunes are made and lost and empires can fall as quickly as they rise. In musical terms a decade spent out of the public eye can be a conspicuous thing. Just over 10 years ago, Cody ChesnuTT shot to fame as part of The Roots’ meteoric hit The Seed 2.0. The acclaimed album The Headphone Masterpiece followed, but since then ChesnuTT has experienced a period of self-imposed exile. In that time The Roots have gone from strength to strength; but what of ChesnuTT? This album sees his much-heralded return, and attempts to fill in the gaps with a no holds barred look at the intervening years.

The album’s title Landing On A Hundred borrows from the phase “Keeping It On Hundred”, meaning telling the whole truth, and this is a collection of brave and introspective tracks with more than a hint of autobiography about them. But rather than form the depressing soundtrack of a man on the edge, these 12 songs are from the viewpoint of a penitent sinner who has made mistakes and come out of the other side a wiser and stronger person. It’s questionable just how much ChestnuTT or his album’s narrative voice went off the rails, but these tracks are uplifting and sung from the perspective of someone who has experienced the redemptive love of a higher power, or the simple pleasures of family life.

The opening track ‘Till I Met Thee lays this bare. On the surface a gospel track, it’s clear that the Thee of the title can just as well be applied to either the spiritual or ephemeral. It’s an uplifting opener and sets out the tone of redemption that runs through the rest of the disc.

Recorded with a 10-piece band in Memphis’ Royal Studios, this album sees ChesnuTT reveling in the space once used by likes of Ike and Tina Turner and making a point of using the same microphone as Al Green. There’s a classic feel to the albums soul, even if the lyric feel more contemporary – for instance you’d be hard pressed to find a soul standard that starts with the lyric “I used to smoke crack back in the day”.

The album’s closest musical ancestor is undoubtedly Marvin Gaye’s What’s Going On. It has the same frank and introspective tone, managing to be introspective and yet political at the same time. Perhaps not as confrontational as Gaye’s LP the more laid back commentary seems appropriate for our times as the Americans hit the polls again. Under The Spell Of The Handout speaks for itself and What Kind Of Cool (Will We Think Of Next) feels an apt commentary on our shallow times.

The album’s highlight I’ve Been Life proudly proclaims “Since my birth I’ve been the greatest attraction on the Earth”. In terms of music, Landing On A Hundred doesn’t reinvent the wheel, but is a certainly an attractive and solid example of Southern Soul; a confident, strong collection. Perhaps not a headphone masterpiece, but a generous slice of frank and thought-provoking tracks regardless. It’s good to have him back – hopefully we won’t have to wait another 10 years for album number three.