Coldplay – A Head Full Of Dreams 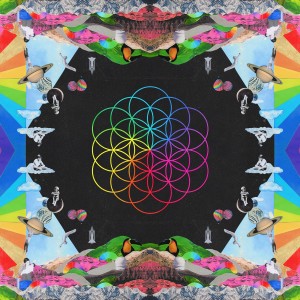 At this stage in their career, Coldplay are pretty much review-proof. You know what a Coldplay album will sound like (lots of piano-based anthems, plenty of ‘woah-woah’s), you know what the reviews will read like (pretty sniffy), you know how many people will rush out and buy it no matter what (a lot). Rather like Adele – who, you may have heard, has sold a fair few copies of her third album recently – they’re about as close as you get to a guaranteed success story these days, no matter what the cool kids may say.

Having said that, Chris Martin and company suffered a bit of a wobble last time around, with their break-up album, Ghost Stories. It wasn’t quite what you’d expect from Coldplay – it was brooding, morose, and with the exception of the Avicii-assisted A Sky Full Of Stars, notably missing any kind of songs which you could imagine filling a stadium while everyone holds up those fancy multi-coloured flashing wristbands. In fact, a lot of the time, it sounded like Bon Iver.

But, if Ghost Stories was Coldplay’s ‘post-marriage’ record, A Head Full Of Dreams is their ‘I’m completely over her and isn’t being single great, eh lads’ album. They’re all back to normal, as confirmed by the opening title track which takes less than three minutes to unleash its first ‘woah-oh-oh’. It’s also Coldplay’s first unashamed ‘pop’ album, with Norwegian producers Stargate (the duo behind many Rihanna, S Club and Katy Perry songs) helming and names like Beyoncé, Tove Lo, Noel Gallagher and President Barack Obama (in sampled form, at least) on the guest list. There’s also someone called Gwyneth Paltrow singing on one song. More on that later.

The best parts of A Head Full Of Dreams are where the band cut loose and play around with expectations. The funky, slinky Hymn For The Weekend is absolutely terrific, featuring the aforementioned Beyoncé on backing vocals and the famously clean living Martin muttering about how drunk and high he is. Bird is also an infectiously little perky number which buries itself quickly into the brain, and Adventure Of A Lifetime does ‘that Coldplay thing’ very well indeed. There’s nothing particularly new or original about it, but its uplifting, soaring nature will melt all but the most cynical of hearts.

However, those who hate Coldplay with the fiery passion of a thousand burning suns will also find plenty to grease their wheels on A Head Full Of Dreams. There’s the lyrics for a start, which are almost universally terrible. Now, Chris Martin has never laid claim to be the world’s greatest lyricist (lest we forget, this is the man who once took “a car downtown to where the lost boys meet” and who would, remember, “rather be a comma than a full stop”), but he really has surpassed himself here.

There’s almost too many lyrical clunkers to mention: the ‘it’ll all be ok in the end’ themed Up & Up, which includes the line “sitting with the boys, it takes away the pain”, there’s also the ‘coming to terms with everything after a marriage ends’ story of Fun (“I know it’s over, but didn’t we have fun?” – take that, everyone who thought life in the Paltrow/Martin household was all macrobiotic misery and vagina steaming), and a line in X Marks The Spot which almost dares you not to snigger: “Stare into darkness, staring at doom, you make my heart go boom a-boom boom”.

And then there’s Everglow, the musical version of the conscious recoupling: an epic piano ballad exploring Martin and Paltrow’s relationship which actually features Gwynnie herself on (uncredited) backing vocals. So, if you’ve ever wanted to hear a celebrity couple singing lines to each other like “they say people come, say people go, but this particular diamond was extra-special”, then this is the song for you. Everybody else may find the whole experience rather queasy.

Which kind of sums up Coldplay as a whole – for every sneering hipster who’ll be happy to pull apart this album, there’ll be millions more who’ll buy it to sing and sob along to. There are whisperings that this may be the final Coldplay record ever (there were similar rumours after Viva La Vida and Ghost Stories as well): but if this is indeed the last we hear from them, never let it be said that they didn’t give the public what they wanted.