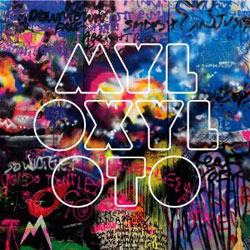 Following 2008’s Viva La Vida Or Death And All His Friends, Coldplay return with the equally enigmatic Mylo Xyloto (that’s “My-Lo-Ze-Lo-toe”, to you and me). And it’s not just the title that’s over-blown and dramatic; Mylo Xyloto is, apparently, a concept album based on a love story with a happy ending. Chris Martin has also thrown “New York graffiti” and the anti-Nazi White Rose Movement into his melting pot of influences. But when it comes down to it this, their fifth album, simply picks up where Viva La Vida… left off and runs with it.

With R.E.M.‘s recent demise, fractures in the Kings Of Leon camp, and a frankly cringey performance at this year’s Glastonbury from fellow headliners U2, traditional stadium bands are dying a slow, collective death. But there are enough key changes, air punches and soaring choruses spread across Mylo Xyloto to fill the void several times over.

From the beginning it fizzes with pent-up electronic energy, and has producer Brian Eno‘s stamp all over it. Where Viva La Vida… was confused and chaotic, its follow up is calmer, more focused and confident. The production could never be accused of being understated, but it feels like they’ve grown into Eno’s ambitions for them. Hurts Like Heaven is a busy, frantic listen, with sounds competing for attention – like The Cure on heat but with more excruciating lyrics (“You use your heart like a weapon, Now it hurts like heaven”).

Paradise looks to the new kings of stadium gigs Take That for its chant-along chorus (“Para-para-paradise”); it’s an earworm that you won’t shake off for days. At the opposite end of the spectrum, Us Against The World is likely to be the soundtrack to as many romantic liaisons as it was faux vomit sounds when Martin dedicated it to wife Gwyneth Paltrow during their Glastonbury set. This is the song they infamously messed up, but it’s not left a sour taste in the band’s mouth, and they’ve worked it into an almost entirely acoustic track. When Coldplay do highs they’re at the top of their game, but the lows are forgettable and weak and, alongside the power-sounds elsewhere on the album, it’s hard not to dismiss this as sentimental dross.

It’s rescued by single Every Teardrop Is A Waterfall. With a “woaahhhh” hook, with gentle, latter day U2 licks and a sparkling wall of feel good sound, it’s Coldplay-by-numbers. A nonsensical anthem about nothing at all (“I turn the music up, I got my records on…My heart is beating and my pulses start, Cathedrals in my heart”), it’s one of the best songs on the album but it feels a decade old already. It’s gentle and nice; that’s what Coldplay do, but it doesn’t stop you secretly wishing they’d pull a new trick out the bag and shock us.

While the much hyped Princess of China – their duet with Rihanna – doesn’t exactly do that, it gives a go by throwing a eurodisco intro over a blinged up standard Coldplay song. The result is a confused racket that sounds like one of the cooler X-Factor contestants has given Speed Of Sound an urban makeover. It’s forced, static, and it’s hard to know which one is hoping to win points.

The album closes with Up With The Birds, a lyrical pick-n-mix cover of Leonard Cohen‘s Anthem. It’s an interesting choice to wrap up with; the sedate, poetic lullaby perhaps signalling the end of Martin’s “concept”.

Over the years they’ve become an easy target, pumping out one MOR, radio friendly single after another. But they’re consistent, and for those who want another dose of warm, cosy fluff, this will do the trick. Rihanna’s appearance aside, Mylo Xyloto is everything you’d expect from a Coldplay album.