Coldplay – Viva La Vida Or Death And All His Friends 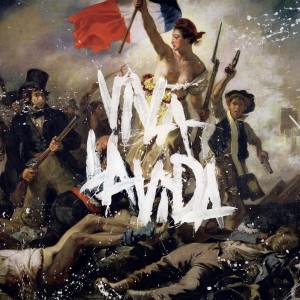 All the talk before Coldplay released their last album was how an unforeseen delay of the album’s release (caused allegedly by Chris Martin being scared witless by, erm, Morning Runner) would lead to a profits warning by EMI – that’s how much was riding on what turned out to be a pretty underwhelming record.

This time round, you could be forgiven for EMI’s shareholders panicking once again. All the talk is of musical revolution – it’s Bob Dylan goes electric, it’s Coldplay’s very own Achtung Baby, maybe even their Kid A…

Or, maybe not. For, although this is undoubtedly Coldplay’s most musically adventurous album, it certainly won’t scare away the millions of people who bought their first three albums. True, there’s a little less trademark piano, which has been replaced by excessive percussion and some unusual song structures, but it’s certainly not an unrecognisable Chris Martin who welcomes us aboard the rather pretentiously titled album.

An instrumental opening up the record is about as avant-garde as Coldplay get here – but as instrumental opening tracks go, it’s pretty damn good. Life In Technicolour builds up slowly, then bursts into action, aided by some ‘woah-oh-oh’s from Martin. It’s an uplifting opening, which bodes well for the next 45 minutes.

There are several tracks that merge into each other, giving the impression sometimes of a total shift in time signatures – Yes for example begins as a woozy, doomy ballad, with Martin wearily intoning “I’m just so tired of this loneliness” before effortless spiralling off into Chinese Sleep Chant, which with its barrage of guitars and whispered vocals, sounds like it could be an out-take from a Ride or Asobi Seksu album.

It’s a similar story with Lovers In Japan, although slightly more Coldplay-esque. The opening is all chiming guitars and soaring choruses – the closest that the band have ever come to U2 in effect – before quickly changing tone into a more sombre piano ballad, Reign Of Love. The idea behind these ‘hidden tracks’ is apparently intended to encourage people to download the whole album rather than specific tracks, but it works very well.

Viva La Vida also contains some of Chris Martin’s best songs to date, such as the excellent, string drenched Viva La Vida which rivals Arcade Fire for sheer uplifting goodness, and the stomping Violet Hill, which cleverly switches from snarling and aggressive to plaintive and yearning at the click of a finger.

There are other nice touches throughout – the clattering percussion on Cemeteries Of London, the backwards guitar loop on Strawberry Swing and the closing Death And All His Friends which expertedly builds up to a bellowing chorus of “I don’t want a cycle of recycled revenge, I don’t want to follow death and all of his friends” which is so impassioned you’ll have trouble stopping yourself joining in.

Yet there are other moments which stop this being Martin’s masterpiece. He’s still got that habit of writing lyrics in platitudes and cliches – the otherwise excellent 42 solemnly informs us that “those who are dead are not dead, they’re just living in my head” while throughout the album there is mention of time being short, someday the sun will come out, big fish in little ponds and so on.

It’s a shame because the aforementioned 42 is probably the furthest they’ve pushed the boat out musically – there are about three different melodies in there, switching from piano ballad, to funky guitar wig-out, a hand-clapping section, before switching back to the piano ballad. Credit for this should go to producer Brian Eno, who’s done a similar job to what he did with Paul Simon a couple of years ago – subtly adding little touches here and there in order to develop the band’s sound without scaring off the casual fan.

They’re a much maligned bunch are Coldplay – mainly because they’re so successful. Yet you only become successful if you’re good at what you do, and Coldplay are extremely good at what they do. While this doesn’t quite hit the heady heights of A Rush Of Blood To The Head, it’s a huge improvement on the beiger than beige X & Y, and if their next album (apparently featuring a Kylie Minogue duet!) continues this trajectory, we could have something pretty special on our hands.