Colin Stetson & Sarah Neufeld – Never Were The Way She Was 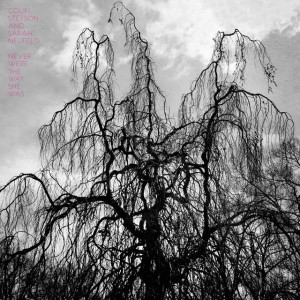 Colin Stetson and Sarah Neufeld are probably most well known as members of Arcade Fire, where Stetson provides his unique take on saxophone and Neufeld fulfils violin duties. Away from the Canadian behemoths, the pair are renowned soloists delicately manoeuvring along the boundaries of the avant garde, each attempting to bring something new and innovative to their instrument of choice.

As individuals, their solo work is held in the highest esteem. Stetson’s songs on his solo trilogy New History Warfare have seen him garner considerable plaudits, and rightly so. Similarly, Neufeld’s debut solo album, 2013’s Hero Brother, was greeted with warmth and high praise.

Together, there’s been their work with Arcade Fire, Stetson has collaborated with Bell Orchestre (Neufeld’s six-piece instrumental band) and they worked on the soundtrack for the film Blue Caprice. Although they have performed in the same ensembles or on the same projects, until now, they’d not yet collaborated in earnest as a unified force.
Never Were The Way She Was is most definitely a joint effort with neither one apparently taking the lead, instead they combine to create an album filled with claustrophobic but occasionally joyous soundscapes.

Perhaps the most impressive point about the album is that the whole album was performed live with no loops or overdubs, because whilst Stetson and Neufeld are well versed in minimalist approaches this album is full of nuance and layers, all of which begs the question – just how did they do this?

The answer of course lies in the duo’s approach to their instrument. Stetson’s mastery of circular breathing, vocalisations, and percussive approach to the sax (there are times when the his keying performs the duties of a rudimentary drum set) is impressive, and at times it is easy to forget that you’re hearing a saxophone at all such is the transformative nature of his performance. Neufeld’s violin work is up there with John Cale’s (viola – for the nitpickers); emotive, innovative and instinctive.

When combined, the music the pair creates sounds as if it is being performed by multiple players. The skittering In The Vespers, for example babbles like a gang of excited geese, with Stetson’s saxphone conjuring up an excited chatter underpinned by Neufeld’s long elegant strokes. The unsettling journey of The Rest Of Us is initially propelled by scampering percussion and waspish interjections from both parties’ instruments, whilst their vocal flourishes sound both pained and exultant. At the midpoint it switches through the gears, and accelerates further still into chaos, clattering and howling as it goes. With The Dark Hug Of Time is a more brooding piece, the sax taking on the guise of a feral animal roaring in pain as the violin shimmers and a steady beat drives the piece along with a terrifying inevitability. The album is based on a narrative concept about a girl who ages at the same rate as the mountains, it would be fair to say that Dark Hug represents the time that dinosaurs ruled the earth, such is its primal nature.

The fact is that many of these pieces develop along a slow evolutionary curve, often beginning with minimal sound as the structures introduce themselves and layers are slowly built. It is fair to say however, that these pieces never really factor in a crescendo. It’s a choice allows the performers and the pieces to develop naturally, with tones and moods being set, developed, and left if needs be. Sometimes it feels like the songs are a little sketchy, but that merely adds to their charm.

Whilst there are a few darker moments (particularly towards the midsection) there’s are also a number of delicate and beautiful moments too . Opening track The Sun Roars Into View for example glimmers with hope and positivity, as Neufeld’s soaring violins reach for the heavens. Won’t Be A Thing To Become meanwhile is a laid back contemplation, that finds the pair in primordial mood as they bubble and drone gracefully together. It’s a fine example of the strength of the pair together, rather than as individual soloists.