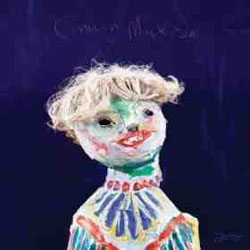 Can’t go wrong with dolphins. Intelligent, beautiful, and willing to call upon their dolphin mafia should a troubled diver ask sweetly enough, it would be tricky to find someone who wouldn’t value one as a pal. Psychedelic dreamer Connan Mockasin takes this further, proving his eternal devotion to the chirpy marine mammals with latest release Forever Dolphin Love / Forever Dolphin Live.

Thanks to a unique sense of style and ambition, the music of the New Zealand-born bottlenose buff is gradually emerging. A classically trained jazz musician, birth surname Hosford, he appears to bask within a state many merely yearn for; a continuation of childhood fantastical musings. His newest LP, which is a re-release of 2010’s Please Turn Me Into A Snat, is packaged with a collection of recordings from various concerts. With a listing that ranges from the marvellously bonkers to quietly poetic, few should have dispute with a second spin.

There are a number of features on Forever Dolphin Love that allow its content to neatly coincide with the title. Riddled with high frequency squeaks, curious submarine bellows, and ambiguous titters, listeners could be forgiven for wondering if sections were recorded deep in the ocean by minuscule microphones placed atop the creatures themselves. Indeed, standout track It’s Choade My Dear could easily serve as an ode to a particularly endearing dolphin, spotted with enough distant guitar slides to entice Hosford’s favourite sea-dweller. Delightfully dusty, this track is at times reminiscent of a particularly wistful David Bowie. Another highlight is Muss, a shivery piano dominated ditty that could have dissolved into choke-speed punk cabaret a la Dresden Dolls, yet becomes something profound; a loose-lipped tale of dejection.

Much of the disorientating helium-pitched utterances are a component of Connan’s varied vocal turns. Mouse choirs feature heavily in insidious Faking Jazz Together, which on first listen sounds like a disjointed romantic soundtrack but slides into padding calypso, laced with Arabian spice. Such a style might have caused issues had it not been for a sophisticated diversity; tracks such as the galloping Egon Hosford are daintily balanced. The delirious Unicorn In Uniform, which is dappled with rippling wobbles, climaxes with hypnotic keys midway between 1960s bingo dancehall and a martian musical. This LP is experimental in every sense, with track length spanning from 25 seconds of Hawaiian twang in the mesmerising Grampa Moff, to the spooky allure of the decidedly unstable 10 minute title track.

Hosford’s latest effort demonstrates the strength not only of his musical talent, but a pleasing earnestness. In the coming months he will work with the versatile singer-songwriter Charlotte Gainsbourg and provide support for Warpaint. A flowery, exotic affair, Forever Dolphin Love / Forever Dolphin Live is a fascinating LP, determined to seize listeners by the flippers on first listen. Truly an intriguing jewel of an album.