Connan Mockasin – Please Turn Me Into The Snat 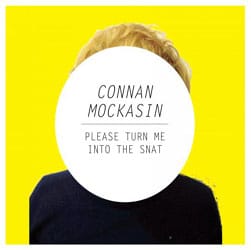 It’s always surprising to hear an album that genuinely sounds nothing like anything else about at the moment. Please Turn Me Into The Snat, the debut album from New Zealand’s Connan Mockasin, certainly nods to other bands – a dash of The Beatles, a smidgen of the stoned psychedelica MGMT favour at the moment – but turns any hint of influence and skews it via a wonderfully over-active imagination.

Listening to the album can feel like trying to hold sand; the songs almost creep out of the speakers unannounced, drifting into one another as if one whole. Some of them stretch out to 10 minutes whilst others come and go in the blink of an eye. Throughout, Connan’s voice is given an alien-like quality, which is usually wholly appropriate when coupled with the fact the lyrics are mainly formless babble (song titles include things like Forever Dolphin Love, It’s Choad My Dear and Megumi The Milkyway Above).

If all this sounds fairly insufferable, then it’s to Connan’s credit that the album takes you into his world and keeps you there for the full 40 minutes. His naivety and willingness to experiment even with the form an album should take makes for a constantly enticing listen. Opener Megumi Milkyway Above shuffles along percussively, odd yelps and animal noises punctuating the breezy melody, whilst Faking Jazz Together marries an off-kilter guitar with an almost Spanish samba of bongo drums and shakers.

The album’s centrepiece – and, oddly, its first single – is the 10 minute long Forever Dolphin Love. Morphing from a spooky harpsichord opening to a dreamy coda via what sounds like a malfunctioning keyboard interlude, it’s like a stoned version of Bohemian Rhapsody, its constituent parts seemingly at odds with each other but somehow (just) making sense.

Unicorn In Uniform, meanwhile, is relatively straightforward, if you consider backwards strings and spooky, effect-laden vocals the norm; and as the album progresses, it is. Yet only the racing Egon Hosford overplays the “I’m crazy, me” persona; its almost spaghetti western feel quite at odds with the rest of the album.

By the time the title track finishes and closes the album, the snap back into reality is a sudden one. Little of what has gone before may have made sense, but it’s a world perfect for escaping, an hallucinatory trip into the mind of a very talented young man.