Cornershop – England Is A Garden 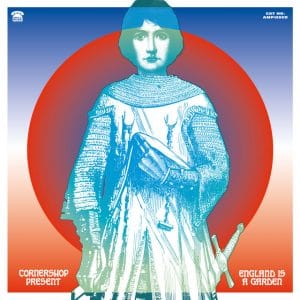 The main reference point for many when considering Cornershop will still be their 1997 hit single Brimful Of Asha but they’ve pursued a distinctive, solitary path since then, collaborating with other artists and taking inspiration from other genres while gently subsuming them into their own music.

England Is A Garden is their ninth album and it sees the duo of Tjinder Singh and Ben Ayres build on this key strength like they did on albums like 2002’s Handcream For A Generation and 2009’s Judy Sucks A Lemon For Breakfast. It’s their first album of new material since 2012’s Urban Turban (if you discount Hold On It’s Easy, their relatively curveball 2015 easy listening rerecording of their debut album Hold On It Hurts) and it also shows they still have political and social messages to project in their quietly outspoken style.

The vibrant early pair of St Marie Under Canon and No Rock: Save In Roll are two of the most immediate tracks on the album, all buzzing bluesy garage rock shot through with melody. Later, I’m A Wooden Soldier adds glam and psych to the styles successfully incorporated. The album is also partly a celebration of their Black Country roots and its role in the development of heavy metal and while musically the album never directly emulates this genre tracks like these certainly give a nod in that direction.

Guitars may dominate for much of the album but there are moments where they diverge away. Everywhere That Wog Army Roam has warm reggae undertones not to mention a strong political dimension lyrically – the song recounts the negative experiences of immigrant populations in the UK – “everywhere that wog army roam, policemen follow them” is the repeated refrain. There’s a depressing relevance to contemporary Britain here also, given the ongoing rise of nationalistic and xenophobic sentiment.

Slingshot and Highly Amplified strike a different tone and offer moments of respite, garlanded with flute and strings respectively. The title track meanwhile is adorned with birdsong and tabla to offer further proof (if any was needed) that they’re much more than a straightforward guitar outfit these days. One Uncareful Lady Owner meanwhile further embellishes the sound with sitar accents. They may never reach the heights of 20 years ago but England Is A Garden shows them to have reached a level of reliability, consistency and competence that many other bands would gladly take.