by Darren Lee
published: 14 May 2012 in Album Reviews
Tweet 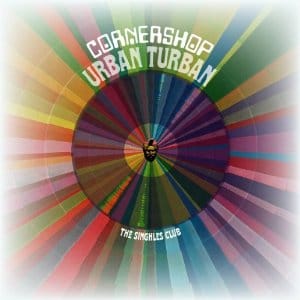 It’s a surprise to hear that Urban Turban is Cornershop’s eighth album; apart from a loyal fan base there’s still a few who equate them solely with the ’90s titanic hit that was Brimful Of Asha. A lot of water has flowed under the bridge since then, and while commercial success has yet to be repeated there’s a steadfast refusal to not let that one song define their entire career.

Urban Turban is a collection of 11 collaborations, each one wildly different, ranging from Indian influenced indie to electronica. At times it’s ’80s disco cool, at times it’s playful fun and at other times it’s Screamadelica by way of Mumbai and Paris. Get your passports ready for a musical jaunt around the globe.

We begin in a Lancastrian primary school for What Did The Hippie Have In His Bag? – a junior Asha with a pleasing hook and memorable refrain, featuring school kids on backing vocals. The seemingly improvised lyrics are a mixture of Yellow Submarine, Sesame Street and Edward Lear nonsense poem. It’s probably the only song where an instrumental is called for because of a dropped crayon. As openers go it’s familiar territory, easing you in with a deliberately childish simplicity that avoids nausea in favour of pure earwormery.

Suddenly we’re in more electronic territory with the likes of Non-Stop Radio featuring French vocalist Celeste adding some sultry disco cool to a Billy Jean-esque backbeat. Solid Gold is a simple homage to chart dance and we are also treated to a dirty Bollywood funk track named after long since re-branded Black Country radio station Beacon 303.

And if that’s not enough there’s the jazzy funk of Concrete, Concrete and Soko’s kooky rambling over a trademark Cornershop hook on Something Makes You Feel Like. Amar’s vocals on Inspector Baba Singh’s Lament seem to be laid over a ’80s TV theme, complete with Seinfeld style slap bass (as strange as it may seem this is actually a good thing.)

After that we finish our journey a little dizzied with all this leaping about the globe and the last track admittedly goes out on a bit of a whimper with the return of the hippie’s bag and an extended mix that doesn’t really add anything to the overall disc.

The distinct nature of each track on Urban Turban means you can listen to this on shuffle and still get a similar experience, and that may be a good or bad thing depending on your viewpoint. This hippie’s bag is certainly a mixed one, and while its contents are diverse it perhaps needs more of a cohesive plan running through it. The tracks are well made and good stuff, but on the whole Urban Turban feels a little too all over the shop to pack the wallop it deserves.