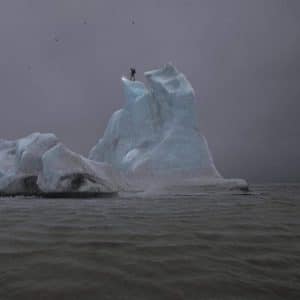 Smythe’s previous album, Circulate Susanna, was one of the finest of 2018, a major artistic statement crafting a meticulously detailed, imaginative and highly original sound world in response to stories from rural America. Inspired by Andrew Hill’s classic Blue Note album Lift Every Voice (1970), his new project is very much an album for this moment, reflecting on ideas of optimism and political resistance. Smythe talks about Hill’s work being “a music of transcendent optimism in the face of overwhelming harm”.

By way of contrast, Smythe defines collegiate a cappella (with its roots in the Yale Whiffenpoofs) as capturing ‘a complicated…poisoned-by-whiteness American optimism’. Another key text for this album is The Whiffenpoof Song, based on Rudyard Kipling’s poem Gentlemen Rankers. Fragments of these sources are threaded through Smythe’s music and deconstructed. With issues surrounding privilege and power dynamics once again clearly in the spotlight, Accelerate Every Voice’s reflection feels like a timely and intelligent contribution to a still necessary conversation.

Smythe has opted to explore these complex ideas through the medium of vocal arrangements, his piano providing the only instrument beyond voices. He has collaborated with vocal percussionist Kari Francis and assembled five vocalists. The mostly concise pieces feature vocal percussion and vocal bass lines, with Smythe providing piano, keyboard and additional electronics. The result is a music that is purposefully hard to categorise or define. While it shares some values and approaches with contemporary jazz composition, it is also possible to look composers such as Robert Ashley or Alvin Lucier or to other contemporary works such as Björk’s Medúlla (another almost-but-not-quite vocal only work) or Holly Herndon’s partially AI generated PROTO (Smythe also speaks of ‘cyborg choirs’) for useful points of comparison.

Close to half of the album is devoted to the 19 minute closing piece Piano And Ocean Waves For Deep Relaxation. From its title, this might appear to be a Brian Eno-esque flirtation with ambience, but the inspiration of Annea Lockwood’s Southern Exposure (in which a piano is left to vanish into rising tides) serves as a focal point for concerns over rising sea levels and global warming. The supposedly relaxing ebbing and flowing textures of this rumination actually sound a particularly ominous and menacing note.

Whilst Piano And Ocean Waves… might initially seem like a sonic outlier from the rest of the album, the kind of ironic duality it espouses seems of a piece with the rest of Smythe’s music here. Whilst Accelerate Every Voice could be a cerebral or intellectual project, it also has a playfulness and darting energy that captivates at a more immediate and visceral level. The opening Northern Cities Vowel Shift is striking in its use of microtonal harmonies, contrasting vocal punctuations with busier, flurrying piano lines. Smythe uses a setup with an additional keyboard tuned a quarter tone sharp. Weatherproof Song features some precisely executed rhythmic sparring. Throughout, fragmentary ideas seem to unite and then dissipate, sometimes congealing in discernible pieces of language, otherwise revelling in sound to convey anguish or transcendence.

Accelerate Every Voice is a noticeably different work from Circulate Susanna, but no less powerful or considered. This is a music keyed in to its inspirations, but also benefitting from wit as well as wisdom. It feels meticulously organised but also with a sense of innovation and freedom.