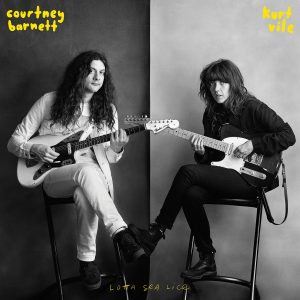 The announcement of a Courtney Barnett/Kurt Vile collaborative record earlier in the year felt like Christmas had come early. Both artists have overcome the perilously reductive ‘slacker-rock’ tag to make some of the most beguiling and imaginative records of recent years. Although individually much of the appeal of their music is its very uniqueness, they do share a certain ascetic which made the impending union feel perfect. It’s difficult to imagine how the combination of the dusty charm of Vile’s music paired with Barnett’s micro-focused wit couldn’t work. Then again, when a notion feels so flawless an inevitable wave of apprehension creeps in: could it possibly stand up to such a weighty reckoning?

In the face of amplified expectation, they have flipped the hyperbole on its head and made a quietly unassuming record. In other hands the deferential nature of the songs on Lotta Sea Lice might have come across as one giant humblebrag, but the sweet-tempered Continental Breakfast feels entirely genuine. The track is accompanied by an impossibly adorable video that shows Barnett and Vile at home, hanging out with their friends, partners, and children. Its simplicity and unguardedness perfectly underpins this tale of transient friendship that the pair share – “I cherish my intercontinental friendships/Not very big on enemies” – via a vocal relay, hazy rumination, jangling guitars and lightly brushed percussion.

This is undoubtedly a record that celebrates and cherishes friendship. But it’s also the product of two people who ostensibly lead complicated lives that involve circling the world and being separated from their loved ones on a regular basis. Perhaps unsurprisingly, the pair prize simple pleasures over grand ones. Over Everything extols the virtues of the great outdoors and being in fine fettle – “When I’m outside in a real good mood/You could almost forget ‘bout all the other things” – and the restorative nature of a great guitar sound “bend a blues riff that hangs over everything.” Geography, and possibly culture, might separate the American and Australian, but they are unified in their musical lives.

The modesty of the message extends to the album’s instrumentation. It’s gentler than Barnett’s heavier rocking songs and more pared down than some of Vile’s lusher arrangements. Percussion is often kept to a minimum, and generally their guitars sympathetically frame rather than vie for attention with over-arching solos. Blue Cheese has a charming country lilt and Peeping Tom benefits from spare but melodic guitar backing. Occasionally, the sparsity can lag a little – the idling On Script being a case in point – but overall the track listing has a zephyr-like leverage that softly propels it forward.

Both the pace and the volume is increased on a couple of tracks. The wonderfully odd Blue Cheese – “I didn’t mean to cough on her/forgot the have fabric softener” – has a welcome jaunty tempo, and Fear Is Like A Forest is filled with clamouring guitars. The latter more than recalls Neil Young’s guitar flicks and features a deliciously smokey intro, going on to maintain a relaxed yet insistent groove that backs Vile’s warm drawl and Barnett’s deadpan delivery.

Alongside a nod to the so-called godfather of grunge, the duo also pays homage to ‘90s alt-rock in the form of a Belly cover. The record concludes with a gorgeous version of Untogether from 1993’s Star. It may be the sweetest sounding song, but it’s a bittersweet payoff. As much as their message is so simple and positive throughout, realism and bitter experience are also apparent, as Outta Woodwork’s sleepy, yet incisive, takedown of the insincere and self-absorbed attests: “It must be tiring trying so hard to look like you’re not really trying at all.” Moments like these save the record from accusations of hippy idealism, as does the last line of Untogether – “You can dry your eyes/you can’t hold the unpossibly untogether.”

Courtney Barnett and Kurt Vile are brave to make something so gentle, natural and unguarded. They’ve managed to strive for an ideal informed by a real sense of pragmatism, and in the process, they’ve made one of the warmest, good-hearted records of the year. It urges you to slow down and take notice the overlooked, under-appreciated and, ultimately, the most important things. Lotta Sea Lice is the perfect tonic for a hot-headed world.