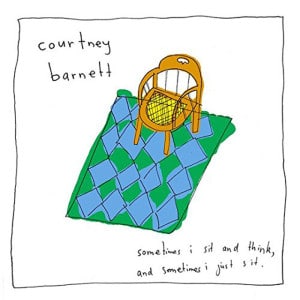 Over the past three years, the career of Melbourne-based singer/songwriter Courtney Barnett has steadily gathered momentum through a succession of much-lauded singles and EPs. It means there’s a pretty substantial amount of anticipation surrounding her first full-length release, Sometimes I Sit And Think, And Sometimes I Just Sit.

Barnett has a conversational delivery whose elongated vowels can’t help but evoke her fellow Antipodean performers Pip Brown of Ladyhawke and Allo Darlin’s Elizabeth Morris. But, accent aside, she’s a highly adaptable performer: wistful on Depreston, anguished on Kim’s Caravan and, on the grungey Pedestrian At Best, skirting above the bars like Highway 61 Revisited-era Bob Dylan.

Barnett’s strong suit is her words. Stick a pin anywhere in Sometimes I Sit…’s lyric sheet, and it’s likely to land on a gem. She has a talent for finding strangeness and melancholia in prosaic details. An Illustration Of Loneliness’s depiction of insomnia finds her “staring at the ceiling” and concluding: “it’s a kind of off white, maybe even cream?” Aqua Profunda! is a funny tale of flirtation at a swimming pool (“I tried my best to impress you / Held my breath longer than I’m supposed to”). Elsewhere, Barnett deploys wordplay for no higher purpose than simply to be funny: so, just when Pedestrian At Best risks becoming a sub-Kurt Cobain-style tantrum (“Put me on a pedestal and I’ll only disappoint you”), she immediately undercuts it with a brilliantly petulant kiss-off: “Give me all your money and I’ll make some origami, honey.”

Best of all is Depreston. To describe it as the greatest song about house-hunting ever written may seem like faint praise, but it’s really not. The song finds Barnett and her partner viewing a prospective new home, but what should be an exciting new beginning for the narrator instead sounds like a massive drag. Barnett intones the property’s details – like “the handrail in the shower / a collection of those canisters for coffee, tea and flour / and a photo of a young man in a van in Vietnam” – with a creeping sense of ennui. (The way she sings the line “It’s going pretty cheap you say? Well it’s a deceased estaa-ate” is the album’s high point.)

As a piece of writing, Depreston is almost matched by effervescent opener Elevator Operator. It comes across initially like a perkier version of Pink Floyd’s Time in its depiction of the “quiet desperation” of a man trapped in a mundane office job. Barnett’s version is “Oliver Paul, 20 years old” who skives off work to “[sit] on the grass building pyramids out of coke cans”. But, just when it looks like Oliver is about to meet a tragic end, the song performs a dextrous twist that’s testament to Barnett’s talent for storytelling.

It’s a shame, then, that the craft of Barnett’s words dwarfs that of her music. Given the amount of critical acclaim she’s received so far in her career, it’s surprising to discover just how conservative her music is. The act that this album most frequently brings to mind is Barnett’s countrymen The Vines. Just like The Vines’ 2002 debut Highly Evolved, Sometimes I Sit… flits between unthreatening grunge (Pedestrian At Best), extended freak-outs (Small Poppies, Kim’s Caravan) and hazy psychedelia (Debbie Downer).

When the songs are as fun to listen to as Pedestrian At Best and Debbie Downer, the album’s lack of musical sophistication doesn’t matter one bit. But there are too many compositions here that feel underwritten. Elevator Operator’s brilliant storytelling helps distract the listener from the song’s lack of musical progression. Dead Fox sounds like a Dodgy album track. Aqua Profunda! might be the worst offender: it’s less a song, more a bunch of riffs cobbled together.

It all means that Sometimes I Sit… is a likeable, enjoyable album rather than a great one. Barnett has written half a masterpiece: let’s hope that, next time round, she can complete the job.