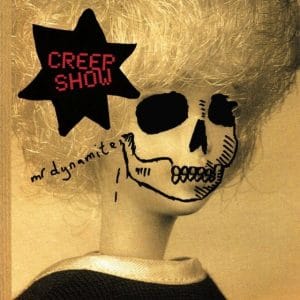 “Hello, I’m Mr Dynamite.” The titular character of Creep Show‘s album introduces himself, his voice emerging out of chopped beats. Creep Show is a collaboration between John Grant and Wrangler, and the vocal here is so warped that it’s impossible to tell whether its origin is Grant’s or that of Wrangler’s Stephen Mallinder. The title track turns into something stripped back and industrial, partway between Mallinder’s old act Cabaret Voltaire and the shock rock of the likes of Rob Zombie and Marilyn Manson.

Creep Show present a couple of other characters who are sketchy in both senses if the word. The story of K Mart Johnny begins with unintelligible fragments of vocal; then its stabbing beats play host to what seems at first to be the monologue of some kind of capitalist bogeyman but which turns out to be more of a nagging childhood memory. Lime Ricky seems like someone who spends more time on the dancefloor, but the mechanical refrain “I’ve got a feeling it’ll be alright” comes across as the words of someone going through the motions.

These intense beat-heavy tracks, which bear the names of oddball characters, are just one facet of the album, however: there’s also room here for spaciousness, meditation and beauty. The inverse of K Mart Johnny’s drunken paranoia can be found in the pulsing electronica of Fall; this is a track about driving things forward through space and time rather than staying in one place and dwelling on the past.

The musicians involved in the collaboration certainly have pedigree. In addition to Mallinder’s pioneering work with Cabaret Voltaire, there’s his PhD thesis, Movement: Journey of the Beat, which, according to its abstract ‘addresses the trajectory and transition of popular culture through the modality of rhythm’.

Then there are the other two members of Wrangler: synth guru Benge, and folktronica experimentalist Phil Winter. And of course Grant, who brings a strong ear for electronic music and a highly literate lyrical style. Some of the tracks here, like crooning closer Safe And Sound, on which he provides a lovely vocal, would have worked nicely on his last solo album. “I am a part of something much bigger, and I can’t be thrown off track,” he sings.

All this adds up to somethings more than four guys messing around with a load of synths and seeing what they come up with. It’s thoughtful, intelligent and considered music that’s not afraid of having a sense of humour.

It’s not without its surprises either. The dark, cold title track opens the album, but it’s followed by Modern Parenting, where big squelchy beats and Grant’s soulful vocal lend a summer jam feel. There are moments where Grant’s voice takes an exaggerated change in pitch and tone, almost certainly treated in some way, but you’re left wondering whether it’s actually the work of his larynx. Pink Squirrel is another fun, upbeat track; its slippery groove playing around bubbling synths and more treated vocals.

But the real highlight is Tokyo Metro, which feels like a subway system based counterpart to Kraftwerk‘s Autobahn. Whereas Kraftwerk needed almost 23 minutes to capture the space and speed of the autobahn, Creep Show use just four to convey the utility, efficiency and compression of the Japanese metro trains. Its snippets of Vocodered Japanese speech could be saying absolutely anything, but they work neatly as subway announcements; and the arpeggiated synth recalls electric currents and Nintendo soundtracks, perfect for the track’s subject matter. Here Creep Show’s smartness, humour and beauty come together.