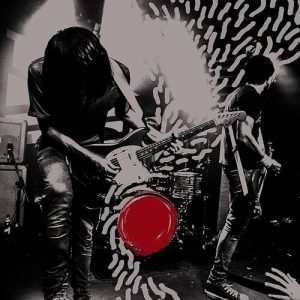 And yet, if you’re Amazon or Facebook or Gary Barlow or Jimmy Carr, it seems like the later is entirely avoidable. Indeed, you could warrant there’s a large proportion of an entire occupation dedicated to it. As for the former, well, when Walt Disney is defrosted and his head attached to a titanium exoskeleton, don’t say we didn’t warn you.

But even if the normal barometers of certainty increasingly require a rethink, then a Cribs album should still be a reasonable bet – both in terms of sound and in quality. Because 24 7 Rock Star Shit, their seventh, may well have been recorded in five days with Steve Albini, it may well be billed as a return to their ‘lo-fi roots’, but this effort maintains the alchemy they’ve managed six times previously.

Even when they’ve got one of The Smiths on guitar. Even when they’ve got the frontman of The Cars producing. Even when everything else in the entire world is unreliable and distorted, you can guarantee that The Cribs will take three parts cynicism, 10 parts core belief in a specific ideal, innumerable parts of songwriting nous, and (seemingly) toss something out which is great.

Sure, there’s a certain slant towards the punkier end of their particular spectrum here: Give Good Time is loose and free-wheeling, drunkenly lurching from one feedback-drenched verse to the next. Year Of Hate is scratchy, screechy and possessing (yet another) riff which appears both off-the-cuff and so immediate it’s surely been poured over for weeks, while Dendrophobia’s chorus “We can’t afford each other / we can’t aff-oo-oo-oo-rd” is the kind of thing you’d call brilliantly Cribs-like if that wasn’t so entirely critically redundant in this scenario.

Working with Albini has resulted in something which is a bit rawer and a bit less ‘produced’ than the more recent records. But when you’re a band who aren’t spending years in a studio chasing the last degree of acoustic fidelity it’s just so much harder to spot. Or indeed to care.

Because 24 7 Rock Star Shit is just a great record. The requisite acoustic number (Sticks And Twigs) is heartfelt and pretty, there’s a sleek poppiness which can’t help but shine from In Your Palace, while the one proper sonic detour, Dead At The Wheel, is a weird, spooky transposition of a quavering, delicate Ryan vocal with an looping synth loop that works really well.