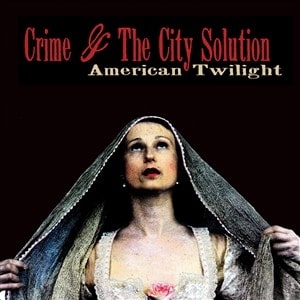 For nearly 40 years in the industry Crime & The City Solution have relatively little to show for themselves. Initially forming in 1977 and then disbanding just two years later in 1979, having not released a single thing, they can hardly be surprised at their anonymity. Lead singer Simon Bonney did get a lot further with his second incarnation of Crime & The City Solution, managing to get off the mark and release three studio albums between 1982 and 1990. Their brand of energetic post punk music earned them some critical respect, but despite this they disbanded again in 1991. All of this means that American Twilight is the band’s first release in 22 years.

The huge lapse in time has changed very little; opening track Goddess immediately introduces Bonney’s distorted, reverb laden vocals encased in a wall of fuzzy psychedelic guitars. The urgency and marching feel to the track show Crime & The City Solution have lost none of the confidence that made their past work so enthralling. Lyrically it’s just as fuzzy as the guitars, with some odd phrases that do little more than rhyme, “eternal woman, love is born, I celebrate your every fall” being just one example. He admits to writing predominantly about relationships, chiefly the good, the bad and the socio-political aspects they can embody. A certain amount of life experience is probably needed to understand some of the songs’ more abstract themes.

Riven Man sees the album taking a funky side path, introducing a Peter Gabriel sounding trumpet section that cuts the dense mix. The track also features more of Bonney’s bizarre lyrics, this time in the form of fuzzy background messages: “My fellow Americans, when you’re in a fight with a bear, you cannot afford to get tired.” Invaluable advice, sure enough. Vocally, he can’t shake off the Nick Cave comparisons with his low, grumbling voice. This becomes even more prominent on the murky ballad Beyond Good And Evil, another reflection on the breakdown of relationships with grand lyrics like “The siren and her song,” but refreshingly the song does end on a slightly more optimistic note, suggesting we can live with the negative: “In the torrent rain, you’re my baby again.”

The title track opens with a filthy, Jon Lord like organ driving the sound, providing a perfect backdrop as Bonney sneers at American selfishness, attacking social inequality: “The poor always be fucked by the rich, just the way it is, always has been, always will be.” And if that wasn’t dark enough the closing track Streets Of West Memphis is even bleaker, circulating themes of “lost paradise” and building to a noisy climax leaving us with a final dismal cry of “here comes the rain”.

Aside from the overt themes of love and loss, at the heart of American Twilight is a sense of social injustice, where wealth is everything and if you lose that there’s no bottom to the well into which you fall. The music manages to evoke a dreary and industrial feel whilst simultaneously sporting enough funky beats and passion to ensure the listener doesn’t come out the other end totally depressed; My Love Takes Me There being a perfect example. Despite the 22-year hiatus, Crime & The City Solution sound as if they’ve never been away, and with such a strong comeback there’s no reason why they can’t finally make an attempt of gaining the recognition they deserve.