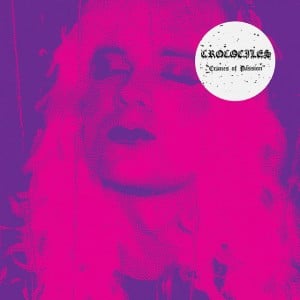 Crocodiles are one of the oldest creatures on the planet, with a family tree that goes back over 200 million years. They are ferocious predators, expert in the art of ambush and often attack without warning. We would be pushing the personification to assign the same attributes to San Diego’s Crocodiles, a band who, despite having a strong dose of retro influences, are about as threatening as the captive inmates at the world famous zoo that they share a home town with.

Crimes Of Passion is their fourth album of lo-fi, scuzzy, sun drenched rock. In many ways a simple, stand up rock ‘n’ roll record, it lasts just over half an hour and features suitably hedonistic song titles like Heavy Metal Clouds, Gimme Some Annihilation and Un Chant D’Amour. It’s not a complicated record, but then sometimes simplicity is all you need.

Opening with the piano roll and tambourine shake of I Like It In The Dark, a gentle introduction to their sound, which is most obviously indebted to Spacemen 3 or The Jesus & Mary Chain, but with more emphasis on melody than feedback and a huge dose of California sun.

So whilst Marquis De Sade might not be quite as sleazy as its namesake, it has a guiding bass reminiscent of Black Rebel Motorcycle Club in their more tender moments and some melody rich keys. Likewise, Heavy Metal Clouds might sounds like a prog-rock nightmare but instead turns out to sound a bit like My Bloody Valentine with a saxophone.

Things are not relentlessly optimistic though. Crocodiles may or may not be named after the seminal album by Echo And The Bunnymen, but on the evidence of Me And My Machine Gun and She Splits Me Up they have at least listened to them. The former is led by a simple, ringing guitar riff, backed up by dreamy vocals and background noise – it has ’80s new wave all over it. The latter is more ’60s garage rock, but with that same guiding guitar line that gives a more reflective air to proceedings.

Crimes Of Passion benefits from a remarkable consistency throughout, and whilst it would be difficult to pick a stand out track, there is also very little filler here either. Whether lead singer Brandon Welchez is singing about trying to be pure (Virgin) or revenge (Gimme Some Annihilation) the same formula applies – slightly scuzzy guitar, strong melody and vocals which sway from slight aggression to trippy.

Crimes Of Passion finds Crocodiles in scintillating form and is full of the kind of carefree rock that should make them more popular than they are. It sticks to a formula, but when the formula works, why not? If they can keep this up, there’s a chance they can get somewhere near the longevity of their reptile namesakes.