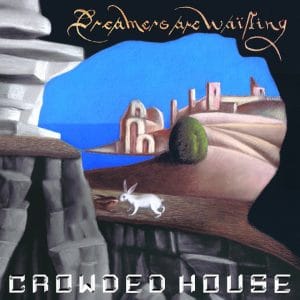 After an 11 year hiatus, Crowded House are back, although the Finns have hardly been sat around with their feet up. The band’s seventh album follows on the heels of Neil Finn’s stint as a touring member of Fleetwood Mac, an experience that seems to have inspired him to give his own band a bit of a shake-up.

The 2021 version of Crowded House is very much a family affair. Both of Finn’s sons, Liam and Elroy, have joined as band members, and producer Mitchell Froom has also been added as keyboard player. With the elder Finn and Nick Seymour remaining as the band’s core, it feels like the perfect refresh of a group already famed for their consistent excellence.

The new members haven’t been recruited as just session musicians however. Liam Finn, in particular, is a pretty renowned musician in his own right and he contributes two songs to the album, while Elroy has co-written Love Isn’t Hard At All. There’s even a very welcome return for Neil’s brother and former bandmate Tim, who receives a credit on Too Good For This World.

The result is an album which is soothingly familiar but not a nostalgic retread. The band’s sardonic sense of humour is in evidence, especially on Whatever You Want, which seems to take a swipe at populist politicians. As ever with Crowded House though, there’s always a sense of melancholy hidden under the surface – whether that be Playing With Fire’s despair at the failings of his own generation (“We’re behind the wheel, we’re driving straight into the wall”) or Show Me The Way’s lyrical imagery of handguns, burning crosses and “holy pain”.

Needless to say, every track on Dreamers Are Waiting is beautifully crafted. Sweet Tooth has a naggingly catchy chorus that rivals anything from Woodface, and the understated beauty and soothing harmonies of opening Bad Times Good bring to mind the band’s finest album Together Alone.

The shakeup of the band’s line-up stops the album from being a pale retread of past glories. The addition of Froom on keyboards is a smart one, and although nobody can properly replace Paul Hester who so tragically died in 2003, Elroy Finn solidly anchors the band on drums. It’s the addition of Liam Finn which is the real masterstroke though – his contributions of Show Me The Way and Goodnight Everyone are rooted in his father’s tradition while also opening up some new directions for the band.

Mostly, this is just a welcome reminder that Neil Finn remains one of the most talented songwriters of his generation. The lovely harmonies on Start Of Something, the Beatles-esque jangly guitars on Love Isn’t Hard At All or the ode to the band’s home country of New Zealand on To The Island – all stand shoulder-to-shoulder with many of the other classics in his back catalogue.

They may never be the coolest name to drop, but that hardly matters after a career spanning over 30 years. Dreamers Are Waiting is a very welcome return for a band who have been away for far too long.