Crowded House – Farewell To The World 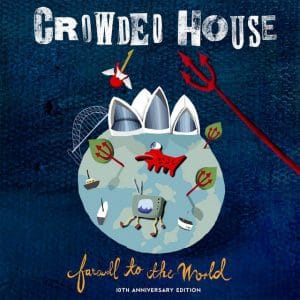 I hope you’ll allow a sad Australian loser to indulge himself in a brief moment of gonzo journalism. Crowded House‘s final studio album, Together Alone, recorded in a hut in the desolate and painfully beautiful surroundings of Kare Kare Beach on New Zealand’s North Island, is a record I simply cannot listen to anymore, so overwhelming is it.

Neil Finn seems to deal in matters of transcendental cosmic importance in every song he writes; yet he also reaches the tragic essence of every human heart in the world. Such is his genius.

So when his band split, it was a sad day for me and many others. But we were left with at least one iota of pleasure. To bring down the curtain on Crowded House, to provide closure, the band played a concert in front of 120,000 on the steps of the Sydney Opera House in 1996. A farewell to the world. This month sees the re-release of the show on DVD (previously only available on VHS), along with this, bizarrely, the first ever official Crowded House live album.

I’m sure it won’t be long before I can’t listen to this too, not least because at the heart of the band’s character, on stage and on record, was Paul Hester. The drummer hanged himself in a Melbourne park last year.

For those who only ever knew Crowded House from the songs that ended up on the Now That’s What I Call Music series, all those familiar favourites are here: Don’t Dream Its Over, Fall At Your Feet, Four Seasons in One Day, Weather With You. However, it was the less heralded of Neil Finn’s compositions that stole the show that night ten years ago this month. Hole In The River, an eerie tale of suicide from the band’s eponymous 1986 debut, suffered then from the messy production of that album as a whole, but evolved over time to become a monolith onstage providing much scope for improvisation, while Fingers of Love sounds bigger and more tremulous than ever.

There are grand sing-a-longs with Better Be Home Soon and a few bars of Hunters and Collectors‘ Throw Your Arms Around Me, and Woodface’s Whispers And Moans to this day remains one of Neil’s finest lyrical achievements: “When I wake up in your room, share one piece of your life/I’d give anything to be a fly upon the wall, to hear your whispers and moans.” Sigh.

But it’s those Together Alone songs that hit home most – In My Command, Private Universe, Distant Sun, Locked Out…

As everyone knows, there are very few truly great live albums. Led Zeppelin‘s How The West Was Won and Tim Buckley‘s Dream Letter come to mind. Maybe The Who Live At Leeds. Farewell To The World perhaps lacks the immediate sheer force and technical musical genius of those albums, but it outdoes them in how deeply affecting it is. You could say it is an album shamelessly trading on its emotion (even Neil had reservations about the idea of the concert at first, deeming it to be ‘vulgar’), but then you remember that Neil Finn’s songs are as moving and poetic as any ever written. By anyone. Ever.