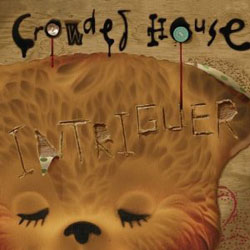 It’s hard to believe that Crowded House have been around since 1985, or that Neil Finn still has the drive and ambition to make the music that first spurred him on to join his brother’s group Split Enz after the departure of Phil Judd in 1977.

While Finn may give a wry Kiwi smile at being referred to as a national treasure in his homeland, that is the kind of status he has now achieved. Indie kids may have sneered when Crowded House rose to the top of the UK and USA charts in the late ’80s and early ’90s, but he has had the last laugh. His beautifully crafted pop songwriting is now f�ted by younger artists while flavours of the month have all returned to their day jobs.

The second instalment in the return of Crowded House, Intriguer follows 2007’s Time On Earth. That was a successful album, but a bit of a mixed bag artistically that reflected its genesis as a Finn solo project. This time around Finn has constructed a more cohesive, band-orientated collection.

It is Liam who casts the most unexpected influence on proceedings. The eclectic nature of his superb I’ll Be Lightning seems to have rubbed off on the old man. Intriguer is the most experimental Crowded House album since Together Alone, with the tricky nuances of, say, Falling Dove and Archers Arrows a far cry from the chart-bound simplicity of previous hits such as Weather With You and Don’t Dream It’s Over.

There were hints of this playful experimentalism on Time On Earth, although that album ultimately came bogged down in too many easy mid-tempo melodies. At times Intriguer recalls the open-mindedness of Finn’s solo work. It struggled to match the commercial impact of Crowded House, so he is taking a chance here.

Finn is old and wise enough to know the rules of the game though, and give this album repeated spins and the insistent melodies of Isolation and Twice If You’re Lucky seep into the pores. Unlike Time On Earth the album never settles into a groove, consistently throwing up delightful little surprises throughout that demonstrate that Finn is more than just a catchy tunesmith.

He has also maintained his knack of expressing universal truths in a few well-chosen words, an ability he shares with Paul McCartney. The chorus of Twice If You’re Lucky (“These are times that come, only once in your life or twice if you’re lucky”) may seem trite written down, but brings a lump to the throat on record.

The record buying public took the difficult Time On Earth to their hearts, maybe swayed by the return of one of pop’s most beloved groups and the tragic death of Paul Hester in 2005. Intriguer will have to stand or fall on its own merits. If there is any justice in the world it will be a bestseller.