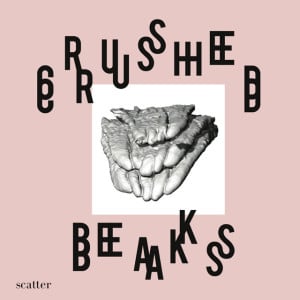 London trio Crushed Beaks are a band emblematic of a simpler age. Their fizzy brand of indie pop is reminiscent of the ITV Chart Show, cut price compilations and music magazines printed on broadsheet newspaper. In essence, they’re an indie band in its purest form. As such their short, sharp debut album Scatter is a satisfyingly easy listen.

The release of Crushed Beaks debut album has been a long time coming. The duo of guitarist Matthew Polie and drummer Alex Morris began making waves back in 2011 and have sporadically released a number of well received, promising slices of noise pop over the last three years. With the introduction of bassist Scott Bowley to the mix, the well-honed Crushed Beaks melodic formula coalesced into Scatter.

The album is a feverish swirl of melodic indie pop and youthful exuberance. There is nothing oblique or difficult at here. Melody is very much king as evidenced on the chiming, crystalline guitar lines that run through History and Replica. There are echoes of The House Of Love, albeit a distinctly underground and lo-fi version. Still, these recordings are rather more polished than Crushed Beaks’ DIY beginnings. The sound is scuzzy enough to stay close to their basic ideals without resorting to a bland pop sheen.

A classic sound runs throughout the album making much of the material instantly recognisable. The years honing their craft have given Crushed Beaks an undeniably winning way with a melody. You get the feeling through that there’s more to be discovered, an underlying darkness and aggression that threatens to be unleashed but never quite escapes. The band professes themselves to be big horror movie fans. It’s disappointing then that at times, some of the songs build to a crescendo that never quite explodes. The heart stopping scare never quite arrives.

Yet there is still much to savour in the timeless thrills that Scatter possesses. It’s a winsome and carefree charm that makes the Goo era Sonic Youth of Overgrown such a glorious uplift and the woozy melancholy of April a lovely, dreamy reverie. Elsewhere, Rising Sign is a sheer joy, ragged yet blissful, it’s an example of how good Crushed Beaks can be.

As an opening statement, Scatter is successful in introducing the band’s sound and influences, yet you feel they can go to even heavier and more intense pastures. There are mere hints of this, most obviously on the punchy riff driven Choices. It’s a direction you would hope they will explore further.

In an age of hyper buzz and hifalutin ideas, there’s something undeniably refreshing about Crushed Beaks’ approach. The music may be unspectacular, but it just works. Much like the memories, an album like this rekindles; it leaves a pleasant warm glow, even if you’ll be clamouring for more.