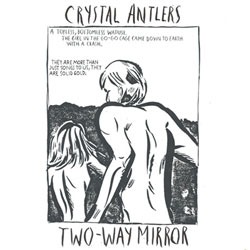 Crystal Antlers’ biggest perk is their rambunctiousness. Anyone hip enough to own their older, fabulously independent releases can bear witness to its crunched, riveting propulsion – a testament to being young and emotionally insatiable. Their second LP Two-Way Mirror continues the essence of that movement, while (somewhat predictably) lightening the dose on their volatile psych-tinged whallop, and folding in some lighter, weirder fringes to their mainlined psychedelic rampage.

This is not to say that Crystal Antlers have put their breaching, head-exploding rawk-out days behind them. Opener Julie’s Story is practically bursting at the seams in a smoldering, thunder-god barrage; arrogant drum-fills proudly chucked around, molten guitar lines shredding the upper half of the neck, and Johnny Bell’s animalistic howl sounding spmehow more bloodthirsty than ever. But that is the only pure example of the band’s unhinged brilliance on Two-Way Mirror – while other songs retain parts of the violence, the bulk of this record is defined by the sporadic, and often eclectic traces of influence they can settle into the track list. There’s an almost carnivalesque chime to Séance, squelching, acid-burned drone in Way Out, basement lo-fi experimentalism on Sun-Bleached, and, probably the most impressively, the free-jazz freakout that gives Always Afraid its spiraling, bad-acid vibe.

Most of this is kept firmly in the realm of pop thanks to Andrew King’s slashing, downwards strum. His hyperactive guitar work keeps the band sounding deliciously manic – angling around the mix with little modesty. It’s the primary thing that keeps Two-Way Mirror fun on an surface level, often the band’s minor experimentalism sound more like a representation of creativity rather than true ingenuity – it’s hard to get a grasp on what the band is truly aiming for, what the eventual evolution of their tricks are meant to be, and that can make their music loftily artless.

In a flattened-out way, it’s pretty easy to get excited about a band like Crystal Antlers – they’re young, enthusiastic, and incredibly dedicated to the music they’re making. The ferociousness on every inch of the production paints a band that is desperately trying to make something legendary, and probably wouldn’t take to well to its criticism – a passion-project, as it were. However the album’s immense force can blind Crystal Antlers from some obvious oversights; their music can be tiring, their unwavering high-treble attack can be homogenous, and the schizophrenic shifts in aesthetic are, at best, pretentious, and at worst, needless kitsch. It all adds up to an album that blazes through ear canals with unyielding muscle, but doesn’t leave much behind worth remembering. There may come a time when Crystal Antlers’ potential coalesces into a great album, and will be greeted with true accolades, rather than a better-luck-next-time send off – unfortunately for us all, Two-Way Mirror is still pre-natal.