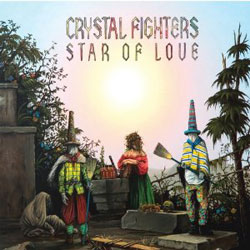 It’s almost inevitable that any review of Crystal Fighters’ debut album is going to be accompaniedby a witty remark about the number of bands in this day and age with the word ‘crystal’ in theirname and how it hasn’t seen this much popularity since the heyday of The Crystal Maze in the1990s.

Exit crap pun stage left, and enter the London five-piece with Star Of Love. Not as aggressive andclaustrophobic as Crystal Castles, nor as psychedelic and crazy as Crystal Antlers,instead they’re sound is far more pop, whilst demonstrating influences from genres far beyond it.

It’s an album comprised of an intriguing mix of Basque folk music with electronicelements. In truth though, there’s very little blending going on; instead it’s more of a tale oftwo differing types of music that somehow ended up on the same record. So far, so brave.

Solar System opens the album. It’s a straightforward electro-pop number but with a surpriseacoustic guitar interlude – an instrument that also underpins Champion Sound. The two tracks sound rather similar.

When they’re at their most folky, Crystal Fighters can be pretty good. Plague is probably the best exampleof this: an energetic tale rolling to the rhythm of someone head over heels in love.It’s a hugely charming, and rather rousing, song.

This material suits them better than the more electronic songs which dominate Star Of Love. In The Summer, the song that follows Plague, feels like a misjudgement. The juddering and spluttering keyboards fail togenerate anything like the same level of excitement. Swallow and Follow suffer similarfates, failing to ignite and instead fizzling out.

What Crystal Fighters are trying to do is interesting, but the end result is an album confused by what it is trying to achieve. Yet it affords space to some really charming folktronica, and offers enough pointers to suggest a great record might be in them.