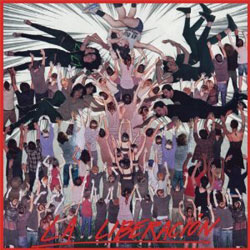 New Rave in the mid-noughties was just a little bit Pot Noodle. Quickly made. Surprisingly Popular. Terrible aftertaste. Yet in 2006, the year that CSS dropped their original self-titled album, the NME hipster brigade were so ridiculously in thrall to the baggy trousers and glowsticks that a turd in a Klaxons t-shirt could have made the Cool List. So a São Paulo gang with a penchant for sequinned leotards and off-the-wall love notes to Death From Above? Pretty much kicking an open door. And as it goes, Cansei De Ser Sexy were even more loveable than that, mashing danceable synths with a poppy snarl that had scenesters from Brazil to Bristol panting for more of Lovefoxxx’s hot, hot, sex – a desire well sated by a non-stop tour that, by all accounts, nearly killed the band by the time of their follow-up, 2008’s Donkey. And oh, did it show.

The second album curse could be explained away for CSS as simple fatigue, but it nearly proved fatal. A punishing drive to the top had left little of their debut’s inventive zest and, with most of the scene being put out to pasture by the time that Donkey lumbered into view, the workhorses of South America looked set for the knacker’s yard.

Thankfully, not quite. Three years later and Lovefoxxx and co return refreshed. Their third effort, La Liberación, has a softer core than CSS’ early offerings, with a number of tracks dialling down the X-Ray Spex brattishness in favour of a chirpier, day-glo sunniness. But, while the energy is back, this reinvention seems half-formed. Forthcoming single Hits Me Like A Rock bounces about with a Cyndi Lauper perkiness before inviting Bobby Gillespie in for an oddly Damon Albarn-esque cameo – more Country House than acid house, but it’s such an odd song choice anyway it really does’t matter. Echo Of Love is even more out of kilter, with Lovefoxxx chirping out a trilly swing over a jaunty, steel-drum-apeing guitar nest. It’s that same blissed-out manner that Friendly Fires toyed with on Hawaiian Air, and, for the same reason, is just as awkward. I Love You, opening with dreams of Madonna and Lady Gaga, wakes up to find it’s more like Steps. (Nightmare.)

The good news is that the more typical CSS pop-nihilism isn’t far behind. I Love You’s bounce soon slides into a messier bridge, and there’s a knowing cynicism in the slurred references to “loooooove and shit” that remind you just who’s behind the mic. City Girl is no less revealing, and its out-of-Kansas tale – of the teenage Lovefoxxx taking her makeshift glam to the big city – is neatly told with twinges of Frankie Goes To Hollywood grandeur offsetting the homely twinkles of salsa guitar and trumpet. Danceable and confident, this is the same two-fingered salute to pop that underlined their classic Let’s Make Love… and it’s inch-perfect.

But the tricky bit with rebelling this openly is doing it without coming across all Ke$ha and, on moments throughout, not least the dull-witted Fuck Everything, that’s exactly where they go. Punk that looked good on paper, the music lacks the boldness to carry off the anarchist sentiment, and neither works alone. In the album’s best moment, the Ratatat-infused Red Alert, they put the revolution aside and finally break new ground – somewhere between New Young Pony Club and Bananarama‘s Cruel Summer, this is a sultry electro-pop that feels so like the way forwards for CSS that the other 10 tracks seem, essentially, a waste of time. Yes, there’s plenty to enjoy on La Liberación, but not enough of it is this.

In a sense, that’s always been the issue with CSS. For every Alala, there’s an album that’s no good – and with a history of hit and miss, and a future lacking new direction, this could be their last chance to convince. La Liberación is not a new lease of life but perhaps a glimpse of one – if only in moments, if only in one track, there still seems to be enough to keep them going. And on those good bits alone, they’re worth just one more chance.