by Luke Winkie
published: 30 May 2011 in Album Reviews
Tweet 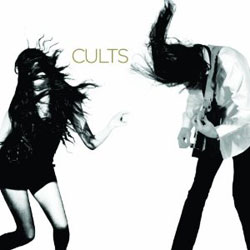 For a band of such modest intention, it’s curious – and perhaps a little exasperating – how the blog hype machine manufactured the mythos around Cults. The Manhattan university-bred duo craft bright, technicolor indie pop, but with the rumors and cryptic relationship with the press it’s been easy to forget that simplicity.

There’s nothing about their music that even vaguely hinges on closed-off aloofness, and Lily Allen‘s notorious swoop on them represents the very real chance that this record could be sold to a lot of Urban Outfitters shoppers in a short amount of time. Their 30-minute self-titled debut is in an odd, existential paradigm – featherdusted, yellow-bellied and almost charming to a fault, but artistically heftier than the bulk of the brill-building revival; it’s the kind of album that will draw humourless lines in the sand between supporters and detractors; not necessarily about the music, but about what a band like Cults represents.

If Cults snuck up on us without hype’s infringement, these songs would easily stand for themselves. The opening trio of Abducted, Go Outside and You Know What I Mean is one of the most indelible sequences of 2011 so far. These songs don’t pound senses with fully-realized soundcraft or a massive anthemic attack, but they show off the band’s stainless knack for melody. It’s an abstract but impressive quality which transcends the quick-decaying quirks of an average blog hype band. The basic songwriting here is the band’s lifeblood and, just like their heroes in Spector and Holland-Dozzier-Holland, they succeed by having an underlying sense of thorough, songwriting talent.

There’s plenty of engineering chops on display here too. Cults focus their rosy, spiraling aesthetic in a number of ways. Most Wanted is dominated by oriental chimes and an It’s A Small World-type cadence; Bad Things is a tribute to the ticky-tack sound of, say, Where Did Our Love Go, and Bumper recreates a boy-girl lovers ballad with astonishing authenticity. It’s clear plenty of palatably smart production choices went into the record, all intended to support the band’s period-piece demeanor, but the accuracy is sparkling. In a strange way, Cults are like the Pixies, uniting boisterous, loud-quiet-loud choruses, off-kilter lyrical runs and anachronistic influences into an inimitable tidal wave of rapture.

For most it’ll probably come down to Oh My God. Coming late in the record, it’s the kind of song you can picture the expressions on the duo’s faces as they realized they were on the brink of genius. It’s a pretty simple beam of synth-euphoria, echoing bells and clapboard drums, accompanied by Madeline Follin’s brilliant vocals. An easy equation that results in one of the most stunning moments of pop genius this year, and if it goes on to define the Summer of 2011, it’s perfectly deserving.

The hype and impending world-dominating popularity has turned Cults into something artificially inflated beyond the miniature, love-blind indie pop band that they are. But on the 30 minutes they commit to record, you don’t hear the band their critics want them to be. They’re writing universal, arms-wide melodies for anyone who cares to lend an ear. Some might find qualms with just how low the barrier for entry is, but we’re still talking about a band who’re taking primary influence from the classic age of songwriters – people who focused solely on crafting a hit. There’s no ambiguity here; Cults are making pop music for the world, not for their cred, not for their label, and not for their scene.