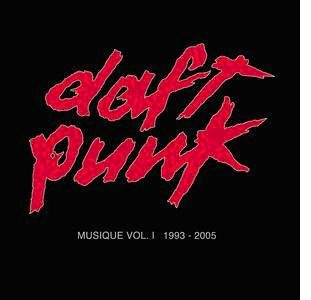 Hard to believe that the twin robot rockers have been playing their shiny disco ball punk/funk for over 12 years! Makes my circuitry spring a leak just thinking about it. Understanding the joke of the faceless dance act better than most, the pair have chosen to hide behind robo-motorcycle helmets lest the bubble burst. That cheeky Gallic humour fizzes through their music as it riffs on glitterball grooves and discoid mutations to create a French-enstein monster that was the flip-side to fellow Gaul’s Air classy chillout fare.

Plundered mainly from their first album (hmmm…law of diminishing returns anyone?) this collection spans from the first flush of getting to know how ‘daft’ and how ‘punk’ these scamps were, to the poorly received third (proper) album Human After All where things took a turn for the dark and angry. Ooh, scary robots! It’s just like the movies! They turn nasty and run amok, spraying WD-40 in yer face, not finding your files and deleting your girlfriend…or something.

The killer riff of Da Funk was their calling card to the world and still sounds as fresh as ever, bubbling up from overheard transistor to full on club bass smacking away like a boxing glove of funk. It set the blueprint for the Daft Punk sound: relentless beat, looped, skewed, electro melodies riding the rhythm into tighter and tighter circles of daft, addictive submission. Peaking and tweaking the frequencies like The Chemical Brothers, Fatboy Slim and other knob-twiddlers of the early ’90s, this truly was music that had taken drugs, raided your record collection, got drunk and was now dancing around in its pants waving its hands in the air, because it just didn’t care, or at least it gave that effect.

The jerky hypnotic fever of Around the World with its nifty bass runs up and down the scale were and remain like a musical medical. If you don’t respond there’s something wrong with your dance bone. Sadly they lean on four (non-single) album tracks from their debut Homework, to pad things out. While these are more killer than filler it seems false economy to buy something even its makers realise is a bit shoddy?

With their second album they took a more retro song-based approach giving us the disco-schtick of One More Time, which filtered the ’70s through a vocodered-silver-boob-tube of bass-breaking cheese. Fizzing like cheap champagne, this is one joyous, positive pill that pops better than bubblewrap. Harder Better Faster Stronger scales new peaks of stomping beats and FX-laden vocals scurrying all over the place, giving the impression that they hadn’t just put on robot helmets, but had actually become the machines. They weren’t just clever-bots, but trend-setters with everyone every track from Cher to Kylie latching onto their disco-stylings.

The dip in tempo of Something About Us surprises as a silky satin sheet ballad wrapped in dripping fondue vocals, proving a change of gear can be just as dramatic and effective. Built around a clipped wah-wah guitar effect, it is a brief respite from the beat-machines.

Robot Rock from Human After All heralds the turn in emotion, set to slabs of rock guitar it follows the same dumb power-riffs of their early work but lacks the invention and seems tired and unfinished. Similarly, Technologic loops it’s computer-jargon soundbites to meltdown and sounded out-dated before it finishes the track.

Finishing off with three remixes for other people that indelibly bear the mark of Daft Punk seems like a desperate measure, ranging from ‘Punk by numbers to the embarrassingly lame-faced shuffle of Forget About The World.

Where to now for these two rusting robots? If LCD Soundsystem can have a hit name-checking them, but for now this is a disappointing collection that leans too heavily on their majestic debut album all those years ago. Daft Punk is playing at your house? Who cares?