by Aaron Payne
published: 9 May 2013 in Album Reviews
Tweet 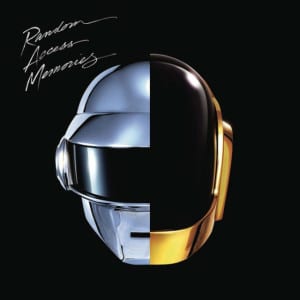 When Random Access Memories finally arrives, it will do so in the wake of a sustained and coordinated promotion campaign of Hollywood proportions. A gallery of artsy videos exists online in which each of Daft Punk’s collaborators sing their praises while underlining that the result of their collaborations has been something new and visionary. Daft Punk, it seems, are on a mission to bring humanity back to the dance machine, and by all accounts, they have done so triumphantly.

Except, unfortunately, they haven’t. Random Access Memories is a bit disappointing. It’s not at all bad, it’s just an anticlimax after all that grandstanding. At over 70 minutes, the album feels rather bloated. Quite a few of the songs are too long, or too empty of ideas, or too willing to repeat themselves, or too willing to play to type; a revolution it ain’t.

Parts of Random Access Memories are pretty fantastic, but we’re talking about two, or possibly three songs: Get Lucky, Giorgio By Moroder and perhaps Lose Yourself To Dance. It doesn’t feel like a coincidence that these tracks are collaborations, featuring Pharrell Williams, Giorgio Moroder and Nile Rodgers. Get Lucky and Lose Yourself To Dance are real dancefloor fillers – they have the groove that Daft Punk are searching for elsewhere on the record, but that’s because of Nile Rodgers’ guitar; the man is a human groove. Pharrell supplies stylish, modern hooks to go over Rodgers’ guitar, and Daft Punk’s production and beats add the remaining crucial elements. A complete synthesis of the best of new and old in dance music is achieved; these suggest the album that could have been.

The rest of the record is a very mixed bag. Some of it might be best described as spaceship music. Contact and Touch are both proggy epics incorporating tropes from ’80s science fiction soundtracks alongside ‘70s guitar solos of epic proportions and (bizarrely) what sounds like excerpts from a draft-stage musical in Touch. On paper these might sound like mad genius, but Daft Punk somehow misplace the wit and the light touch that’s pretty much their trademark. Instead, these long epics become somewhat tedious and there is a strong whiff of egoism and self-indulgence.

Then there’s the filler: Fragments Of Time, Within and Beyond are all perfectly acceptable but they won’t set the world on fire. There is more rehash than revolution to be heard here. The collaboration with Panda Bear, Doin’ It Right, is much better but it sounds quite a lot like Animal Collective with a house beat grafted on, rather than a genuine meeting of minds. Random Access Memories, at various points, sounds uninspired, and whatever else the world was expecting after that massive media campaign, uninspired wasn’t it.

Daft Punk’s attempt to climb above mere retrofetishism and make something new out of the remnants of the ‘70s might end up being the failure that launches a thousand successes. There’s enough promise in the better moments here to suggest they might be on to something. Pharrell Williams claims that he was working on something Nile Rodgers-esque when Daft Punk flew him to Paris and by coincidence asked him to write a part to go with a Nile Rodgers riff. There might well be something in the air, a reaction to David Guetta-style Electronic Dunce Music. A band as big as Daft Punk are well placed to start a movement, but this album doesn’t seem destined to become one of its classics, as admirable an attempt as it (mostly) is.