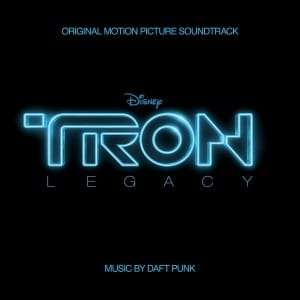 “I kept dreaming of a world I thought I’d never see”. Jeff Bridges‘ words, a snippet of dialogue from the eagerly awaited Tron Legacy, could almost be levelled against Daft Punk, invited to score its soundtrack. The choice of the Parisian duo is a hugely exciting one for fans of cinema and electronica alike, bringing about as it does an unlikely collision of Daft Punk and Walt Disney.

Don’t come here expecting a follow-up to 2005’s Recovery though, for you will leave with precious little for your money. Only fleetingly do we see the Daft Punk of previous records, but the sudden outbursts of energetic disco house are all the more thrilling having heard what goes before.

They have a lot to live up to, given the interstellar score provided for the original film by Wendy Carlos, but their proficiency as orchestrators is immediately striking. Sure, there is a large dollop of Aaron Copland in the main theme, Philip Glass in Solar Sailer, and an Avatar-like sense of dread in the terrific build up of Rinzler and Arena, but this is by and large a brilliantly executed concept.

They show off their prowess especially well through the shrill woodwind and snarling brass of Outlands, but equally importantly in the subtle, cello-led Adagio For Tron, some of the most emotive music here. Yet where they really make this music their own is in the addition of a lovely synth growl that underpins the bass in several numbers, adding extra weight to The Game Has Changed in particular.

Only occasionally do the pair succumb to Hollywood cliché, and 20 gives up the ghost all too easily, but when they really let rip with the 303s on the End Titles, the synth lines circling like birds of prey, this music could not be by anybody else.

On this evidence, then, one of the most eagerly awaited soundtrack albums for years is a laudable success, provided you approach it in the right way. It might not give up its treasures immediately, but if you provide widescreen sound or a pair of expensive headphones, the sonic treats are considerable and mighty. In Enter The Gecko, Gex had his doubts. “Boys, Tron didn’t work once – it’s not going to work twice”, he reasoned. How wrong he was.