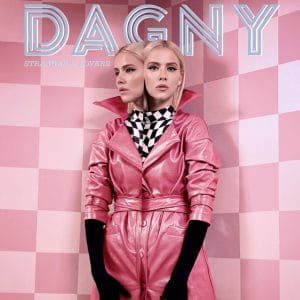 Dagny Norvoll Sandrik hails from Tromsø, Norway, home also to electronica duo Röyksopp and acoustic pop gem Lene Marlin. Enjoying initial moderate success mainly in her homeland, she grew despondent with the music business, and was ready to throw in the towel and apply to university.

Her parents, both jazz musicians, persuaded her to persevere and in 2015, her retro pop-rock track Backbeat was premiered on Zane Lowe Beats 1 on Apple Music. This led to huge streaming success on Spotify, major label interest and a huge crossover moment, as an acoustic version of Backbeat appeared in an episode of Grey’s Anatomy. Her debut EP Ultraviolet followed to wide acclaim, along with more singles and a writing credit on Katy Perry‘s Never Really Over, which contained elements of Dagny’s song Love You Like That.

Her hotly anticipated debut album Strangers / Lovers is pitched as a concept album split into two parts, chronicling the evolution of a relationship. The first half of the album tracks the beginning and flourishing of an exciting love and kicks off with the sassy and inviting Come On Over, the breathy verses leading to a throbbing chorus filled with pop shimmer. Somebody goes full on Carly Rae Jepsen with its pulsating synths and divine vocal harmonies. There is a smooth and sensual interlude in Paris and Let Me Cry is a sweeping mid-tempo ballad allowing a tad of vulnerability into the narrative. Coulda Woulda Shoulda is a funky pop slap with vocal shape-shifts reminiscent of Dua Lipa‘s Levitating, although the lyrics are far less saccharine, and Tension starts off with wonderful strings and soft tinkling, slowly building into a thumping chorus, and keeps things well in the Scandi family, recalling, quite fantastically, Abba‘s The Winner Takes It All.

The second, more introspective, half of the album is signalled by Moment, a funky retro track with some gorgeous harmonies, and a crossroads in the relationship is on the horizon. Please Look At Me begins with a nod to First Aid Kit‘s My Silver Lining before bursting into wonderful Latin pop, coming over all La Isla Bonita, where the lover from San Pedro has ghosted our protagonist. The mood ring turns darker on Bad At Love, a stripped-bare break-up song with piano and vocals echoing Birdy at her most bereft. There is a more optimistic take on It’s Only A Heartbreak, with inspiration taken from Humphrey Bogart’s iconic Casablanca line, as Dagny distracts herself from her sadness and casts a fond and bittersweet eye back.

Bye Bye Baby is perhaps the album’s standout. The ultimate in sad bangers kicks off with enticing, tinkling synth bleeps and a soaring chorus that has deep roots in Robyn‘s back catalogue, with astral vocals and spoken raps. The album closes with the dark and mournful Coast To Coast, the dramatic sonics evoking Lana Del Rey with spy guitars and a haunting vocal lamenting a lost love.

Where fellow Norwegian pop ingenue Sigrid came off more Avril Lavigne on her debut album, Dagny’s roots are rather more in the captivating synth twinkle and sassy pop arena with Dua Lipa and Robyn. Strangers / Lovers is an impressive and versatile debut album, a collection of happy and sad bangers. It proves Dagny can more than hold her own alongside her contemporaries, her textured narratives and smoky and commanding vocals setting her apart.