Damien Jurado – Brothers And Sisters Of The Eternal Son 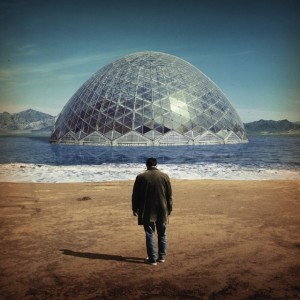 Seattle singer/songwriter Damien Jurado has released a wealth of material since his emergence in 1997, with Brothers And Sisters Of The Eternal Son becoming his 11th album release and, tellingly, his third with The Shins’ multi-instrumentalist Richard Swift on production duties.

Jurado’s lyrics are those of a true poet, words that encourage quizzical thought throughout, often depicting fictional tales “reflecting on alienation, disappearance and the pursuit of self”. 2008’s Caught In The Trees was far more personal, with the after effects of his own divorce reaching out in every heartfelt word. Maraqopa from 2012 showcased more exceptional, intense lyricism with highlight Working Titles being a heart breaking, hauntingly beautiful ode to an ex (whether or not this was from personal experience or not is left a mystery).

Well revered by his peers, Jurado also featured on Moby’s 2013 album Innocents, with his contribution to Almost Home set to become only the second single released from the album next month. Moby had heard the singer on the radio and instantly fell in love with the vulnerability and angelic tones his voice possessed; when the instrumental side of the song was complete, Moby passed it over to Jurado, declaring that the subsequently added lyrics and vocals far exceeded anything that he himself could have provided.

Single Silver Timothy preceded the album release at the back end of 2013, its Latino drumstick clicking percussion ticks along with maracas and Jurado’s high pitched, nasally whining encouraging his frequent Neil Young comparisons. Atmospheric synths and dazzling guitaring lead the song to its conclusion in tremendous style – this is more like gold than silver and it could happily chug along for twice the length, such is its splendour.

Subtle synths again create a foreboding atmosphere for album opener Magic Number, its jazzy, disjointed stop-start structure creating something akin to a smoky suspense thriller soundtrack, with mysterious interludes where nothing but random percussion appears sporadically. Name checking the previous album, Return To Maraqopa is a slow plod through a desperate state of mind; lines such as “you lost your mind on a music note, caught in your throat” will have song interpreters scratching their heads in wonder – all part of the intrigue on offer here.

Subtle acoustic guitar, sparse piano and synth strings adorn Metallic Cloud with more thought provoking lyricism in abundance with lines like “colours don’t change when your life gets strange” hinting at personal reflection. The magnificent, almost desperate Jericho Road oddly recalls Doves during the intro, before heavily distorted vocals appear, developing into tragic wailings and being accompanied by doomy bell tolls to complete the woe. Silver Donna then represents the longest piece of music on the album – six plus minutes of falsetto vocals, simple acoustic guitar, prominent bass beat and maracas where slight instrumental changes lead the song on a meandering path.

Silver Malcolm is another slow effort with more disjointed sections and bubbly synth. The two most delicate numbers – Silver Katherine and Silver Joy – then soften things down to its quietest, folk induced state where Nick Drake comparisons will again resurface. The jaunty closing track Suns In Our Mind contains amongst other things snoring and crowd noise during another stop-start existence, at times sounding more like early Neil Young than, well, latter day Neil Young.

Whilst mainstream success is unlikely, the cult appeal of Damien Jurado continues to cause those that do listen to sit up and take note. If Silver Timothy in particular can find a larger audience then perhaps Jurado will finally become a household name, as it is likely to pull in considerable visitors to the full album. Once inside, the quiet treasures within could open a whole new world for the listener.