by James Skinner
published: 24 May 2010 in Album Reviews
Tweet 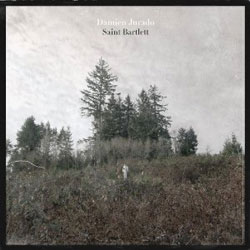 Over the last 15 years you’d be hard-pressed to find an artist as consistent, as affecting, and as thoroughly unassuming as Seattleite Damien Jurado. Alongside experiments in found sound recordings and excursions into full-blooded indie-rock territory, his melancholy strain of acoustica endures. It is the common thread that links his work, and on Saint Bartlett it sounds bigger and more offset by optimism than ever before.

This is evidenced immediately, as Cloudy Shoes bursts into life on a crest of cavernous strings, handclaps, and easy, loping melodies. Atop this sun-kissed instrumentation (pleasantly reminiscent of The Flaming Lips‘ The Soft Bulletin), Jurado’s stream of consciousness lyrics take in dreamlike floating, hospital stays, and a battered, worn mind in need of fixing. It might not sound like the most positive subject matter in the world, but set against blissed-out serenity such as this, the results really are beautiful.

Richard Swift produced and played on Saint Bartlett with Jurado, the pair recording the whole thing together in under a week. It suggests an intuitive understanding of each other as musicians; indeed, even when the record reins in its sound to leave Jurado in the spotlight (as in the haunting Kansas City or With Lightning In Your Hands), crackles of radio static, swooping backing vocals and brushes of ivory embellish and heighten the emotions he channels so adeptly.

As with much of Jurado’s discography, the devil lies in the details. The abject loneliness explored on Rachel & Cali can be felt in the way his gentle voice strains ever so slightly; his quiet utterance of the words “Sometimes I wish you knew / How I keep living for you” is so matter-of-fact you almost miss it. Likewise, the ghostly choir assembled from his voice on The Falling Snow is suitably otherworldly, while the plodding bass that buoys Throwing Your Voice is played wonderfully straight.

Jurado is still ultimately concerned with tales of transience and woe, but he and Swift temper Saint Bartlett with such rich benevolence – from the generous, autumnal arrangements to its thoughtful, crafted lyrics – it is impossible not to be heartened by the whole affair.