by Steven Johnson
published: 1 May 2020 in Album Reviews
Tweet 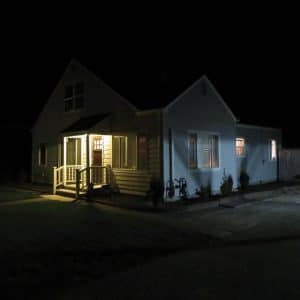 It’s tempting to begin an assessment of Damien Jurado‘s 15th album What’s New, Tomboy? by remarking on how he’s in a rich vein of form following last year’s In The Shape Of A Storm and 2018’s The Horizon Just Laughed. Yet, looking further back into his history, it’s difficult to pinpoint an album that really fell short of expectations. Consistency, integrity and high standards are just enduring hallmarks of a career now into its third decade.

Over these years his music has alternated between mellow, pared back individual efforts and more fleshed out, full band affairs and What’s New, Tomboy? settles broadly somewhere in between the two. There may be a distinct brevity at play with the 10 songs here clocking in at just under half an hour but, importantly, not a second is wasted.

As on Jurado’s other records, there’s a tangible sense of him searching his way through life, confronting challenges and seeking out resolution. His voice remains his biggest strength, bruised and stoic yet also tender and gentle. On songs like Ochoa, it sounds as if it has been lovingly planed and rounded into shape. What’s New, Tomboy? also shows how he continues to excel in documenting life’s harder moments and imperfections.

There’s a bittersweet euphoria to album opener Birds Tricked Into The Trees. We may not know exactly what he’s referring to when he sings “this wasn’t part of the plan, a major flaw in the design” but it feels strangely relatable, as if he’s outlining problems that could easily be existing in our own lives, an emotional template on to which listeners can project their own detail. It results in a close bond being formed early on between artist and listener that remains unbroken throughout.

Alice Hyatt continues the wistful atmosphere but there’s seeds of hope planted deep into its sorrowful foundations. When he sings lines like “Michael was an alphabet, Susan was a place, I was just busy being myself” he showcases his humility which has an endearing, mood-lifting effect. Arthur Aware and Francine meanwhile both have an understated warmth and are subtly embellished with soft synthesiser backdrops that his delicately plucked guitar lines rest upon. The number of tracks named after people helps strengthen the personal nature of the album.

The sparse and ruminative Fool Maria best demonstrates how his lyrics are both welcoming and enigmatic. He sings of someone being as “quiet as an aeroplane before it hits the mountain” while conceding how “my mind was a tired earthquake while my thoughts were breaking dishes”. It has shades of Bill Callahan and Bonnie Prince Billy, which does make you wonder why Jurado isn’t held in similar regard to those artists.

When You Were Few is musically much more foregrounded, with a climbing keyboard melody, but the best is saved for the timeless End Of The Road, which sees him cover universal human themes like fear, insecurity and affection. He’s at his most openly confessional and it’s one of the most straight-down-the middle love songs he’s written in his career. He addresses an unnamed other, trying to offer emotional support; “there will be times when you face the storm, afraid and uncertain at which way is home, I’ll be there to guide you”. The way in which he does this while simultaneously acknowledging his own vulnerabilities is striking.

At times it may seem like he’s destined to remain on the periphery but What’s New, Tomboy? is one of his best albums and deserves better, confirming Damien Jurado to be an artist operating at the peak of his powers.