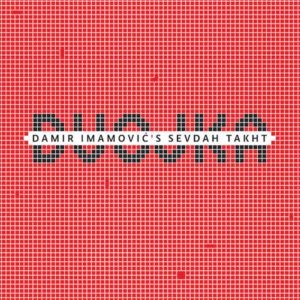 Sevdah is a form of folk music from Bosnia and Herzegovina. It’s melodic, poetic and passionate, and there is something in its scales and chords that connects it to the wider tradition of Balkan music, though it would be all too easy to make the mistake of submerging it in an undefined soup of ‘Balkan’ music and thereby concealing its distinctiveness. Sarajevo-born musician Damir Imamović is steeped in the genre: he is the third generation of his family to be a sevdah singer, carrying on the tradition of his father and grandfather, but adding his own twists.

About half the songs included in Dvojka, the second album from Damir Imamović’s Sevdah Takht, are written by Imamović. The rest are traditional songs or his interpretations or adaptations of the compositions of other sevdah musicians, and it’s pleasing to find that his work stands up the more established songs. Indeed, the album’s coherence is one of its great strengths: the songs range in tone from the wistful to the yearning to the downright melancholy, but the music ties them together into a solid collection.

The title Dvojka signifies the traditional rhythm of sevdah, which Imamović makes a point of deviating from on some occasions. The other musicians in the band also bring their own twists: bassist Ivan Mihajlović says he is informed by African American music, and indeed he provides subtle underpinnings that call to mind good jazz playing; and percussionist Nenad Kovačić brings West African influences, mixing up these rhythms with those traditionally found in sevdah.

Sevdah is about singing, so its right that Imamović’s vocals are the most prominent feature of his band’s sound, and his enormous talent in this respect is no doubt more important than his sevdah heritage. His voice is clear, smooth and nuanced: he’s evidently an excellent sevdah singer but you get the feeling that he could successfully turn himself to any kind of singing. Indeed, it calls to mind the ‘clear, bright voice’ described in the translation of Tambur bije Čelebija Mujo [Mujo Čelebi Plays his Tambur], although in that song the titular character is threatened with hanging for his playing.

The tambur described in that song is also crucial, although for this album Imamović has commissioned a hybrid instrument that’s halfway between the traditional instrument and a guitar. Its sound is just as bright and clear as his voice. Also new for this album is Ivana Đurić’s violin, which contributes greatly to setting the moods of the songs. Lijepi Meho [Fair Mehmed] and Star se Ćurčić pomamio [Old man Ćurčić gave into his lust] are both very lively, while Uz brdo je mene bole none [Up the hill I go and my legs ache] is lilting and stately, with tremulous violin sounds that are reminiscent of Romanian gypsy band Taraf de Haïdouks. Importantly, Đurić knows when to remain silent: closing track Je li rano [Is it day yet] is beautiful enough for its first half with only Imamović’s voice, and Mihajlović’s voice, and the violin flourishes come in at just the right time.

If there is a flaw in Dvojka then it’s the album’s excessive polish; the overall sound is perhaps a little too bright, a little too clear. Imamović might have broken with tradition even further while still keeping to the tenets of the sevdah form if he had allowed the sound to be slightly rawer. His singing is certainly soulful, but there might be even more soul in the music if some of the sheen was taken away. Still, there is much to enjoy here in the album’s crisp production and wonderfully crafted songs.