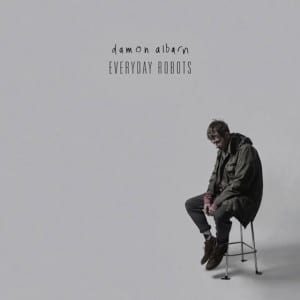 Dissecting and analysing our relationships with technology, Damon Albarn‘s message on his first solo album (no, Gorillaz, Democrazy and The Good, The Bad and The Queen don’t count – though there are fleeting similarities in more than just obvious ways) Everyday Robots may be overt, and it may be well-worn by comrades, acolytes and messrs across the galaxy, but that doesn’t make it any less pertinent, nor does it reduce the gravitas of Albarn’s take.

A deft songwriter to the core, Albarn laments but never wallows, and he proffers an astute critique of modern society and our fascination of and reliance on technology. It’s not exactly subtle in its presentation – have a guess at the meaning behind the title Everyday Robots – but it’s timely and essential nonetheless. You don’t have to lurk behind curtains and dingy shrouds to convey a meaning; you can just bloody say it and have just as much oomph.

However, alongside the dichotomy of nature vs. tech, it’s also a personal record, with the Blur frontman painstakingly scrutinising his 46 years on the planet under a high-powered microscope. From the 1976 droughts (Hollow Ponds), to visits to Tanzania (Mr Tembo), to a childhood spent in Leytonstone, Albarn delves into it all. There are also ruminations on loneliness and the human condition. It’s thematically scattered, reeling off poignancy like Robin Williams telling jokes, but underpinned by a strong sonic environment and the backdrop of Albarn’s life. So while he’s scurrying into musings on our love affair with iPhones (or in Albarn’s case, the iPad), he’s doing it through the lens of his own experiences to ground it in one context and provide a strident musical identity.

The Selfish Giant, featuring Bat For Lashes‘ Natasha Khan’s dulcet pipes, is home to romantic-era piano motifs and glitchy beats. It’s a kind of bare bones dance ballad, with bolshy pulses and simple-yet-sublime melodies. The Brian Eno and Leytonstone Mission Choir-featuring Heavy Seas Of Love is perhaps the grandest cut on the record, with rickety percussion and illustrious piano embellishments. There’s a definite, continual vibe throughout Everyday Robots: it’s pensive, stripped-back and faintly electronic. All fat’s been trimmed, and the real stars are Albarn’s vocal fragility and the ivories he tinkles. Mr Tembo, an ode to a young elephant, is the only real indulgent vacation; it’s tropical pop with shuffling rhythms and an uplifting acoustic guitar earworm.

Everyday Robots is a multi-layered record, much like an aural pavlova, with gooey dollops of bittersweet, ouright sweet, darkly morose and wistful reflection. It’s rather strange tasting pavlova however, squishing sour pain with halcyon nostalgia. This is a meaty record that’ll take considerable chunks of your time to fully appreciate, and is the kind of record that you’ll probably still be trying to completely wrap your head around years down the line, stumbling across hidden noise-nuggets or subtexts. Surely, if anything, this is a testament to Albarn’s status as one of contemporary music’s most enduring songwriters. He’s able to craft a wondrous record with apparent ease. It never sounds laboured or overcooked, always heartfelt and genuine.

We’ve had to wait over 20 years for Albarn to release an album entirely his own, through myriad side projects and other focuses. While it’s not the all-guns-blazing, gung-ho epic slab of epic epicness that unloads two barrels of gumption into your nose on first listen, it’s still phenomenal. It’ll take some time to get to grips with, and requires input – this isn’t a passive album – but you reap what you sow, and if you take enough time with Everyday Robots, you’ll be rewarded with a dazzling LP that’ll lodge itself in your mind from now until your last breath.